Football Federation Australia has finally caved to mounting pressure from furious A-League fans and pledged to put in place a formal appeals process for stadium bans.

After Western Sydney Wanderers supporters on Sunday wrapped up a week of public statements against the governing body by walking out of the Wanderers' A-League clash with Central Coast Mariners, the competition's head Damien De Bohun declared the governing body had been listening. 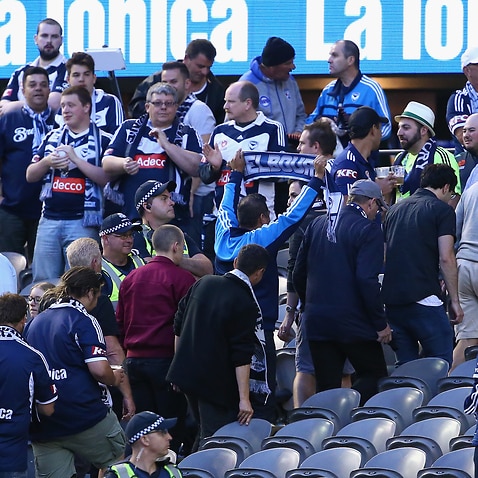 "We will be formalising a process that if a banned spectator can prove to us through new evidence that there has been a mistake made, they can bring that evidence to the club," De Bohun told reporters.

"That club can then work with us and the fan to work through the issue.

"If it is proven that fan has not engaged in that behaviour, the ban will be overturned."

The supporters' groups had yet to formally respond to the proposed new process.

De Bohun claimed there had always been an appeals process of sorts, though it had not been formalised nor communicated with fans.

What started as anger over a perceived privacy breach turned into a backlash against FFA for offering what they saw as heavy-handedness and a lack of support.

The message was heard loud and clear as A-League fans across Australia put on a united front, unfurling banners and marching out of stadiums en masse.

No more so than when nearly 1000 members of the Wanderers' active supporter group, the Red and Black Bloc (RBB), filed out of Central Coast Stadium before their side had scored either of their two winning goals, the brass band even stopping momentarily for their silent protest.

The second read: "FFA: Don't bury your heads in the sand, we've listed our demands!".

The Mariners' Yellow Army also held up their own that said: "Sitting in silence like the FFA. No fans = no football."

The walkout followed that of Melbourne Victory's supporter group the North Terrace, who left Etihad Stadium after half an hour of Saturday night's 2-1 win over Adelaide United. Ex-Socceroos goalkeeper Mark Bosnich gave De Bohun a serve on Sunday and pressed him on why the burden of proof over bans is placed on the accused.

"When are you going to install a proper appeals process? Not for fans to come to you with evidence as to why they should not be banned, when you actually say to them, `This is the reason why you're being banned'?" Bosnich said on Fox Sports.

De Bohun acknowledged FFA needs to improve its communication and vowed to continue investigating the origin of the leak of the banned list, which has potential legal ramifications for News Corp.

But he also felt heartened by the way the football community has united over the issue.

He said FFA had met with a number of active fan groups including Sydney FC's The Cove to try and heal the fractured relationship, and had also extended an open invitation to meet with the RBB and The Terrace.