Australia defender Trent Sainsbury declared that he holds no fears that his international career could be compromised should he fail to play regularly after agreeing to join Inter Milan on a loan deal.

Sainsbury, 25, moved from Jiangsu Suning to the Italian giants in the last moments of January's transfer window.

Both clubs are owned by Chinese group Suning Holdings.

Sainsbury admits he faces a stiff challenge to be able to beak into the Inter team but he is confident that the high-intensity training in Milan will benefit him almost as much as playing in the Chinese Super League.

"Obviously it is not going to be easy trying to get into such a great team that has some fantastic players," Sainsbury said from Inter's training centre at Appiano Gentile outside Milan.

"Which is why you you have to show the coach what you can do at training.

"With regards to the national team, training at Inter is probably almost on par with playing in China.

"The sharpness of training here is going to keep me ready for the Socceroos.

"So I will go from there. I can only control what I can control.

"People were saying when I went to China from PEC Zwolle last year that my international career was over.

"But I played nine consecutive 90-minute games for Australia that year. Everyone has every right to an opinion but that does not mean they are correct. It's a massive challenge for me here and I'm up for it."

Sainsbury's move to Inter came as a bolt from the blue to most Australian football fans ... and not least to the player himself.

"I first came in 'indirect' contact with Inter a few months ago when vice-president Javier Zanetti visited China. It was more of a meet-and-greet thing. He came to say hello and show his face. At that stage there was no mention of me joining Inter," he said.

"When the China ruling on foreigners came in a couple of weeks ago I starting speaking with my club Suning about my possibilities for the season but there was nothing concrete.

"To be honest I did not really know what was happening and I left things in the hands of my manager Tony Rallis. I sort of concentrated on pre-season training.

"Tony then came up to me and said there was an option to come to Inter and of course I jumped at the chance and I said 'yeah, I'm 100 per cent keen for it'."

"It's an opportunity of a lifetime and I know some people would kill for this opportunity.

"And I will try to do everything I possibly can to be successful."

Sainsbury, whose partner Elissa is the daughter of his former Central Coast Mariners coach Graham Arnold, said he had one simple advice from the current Sydney FC boss.

"He said 'go there and enjoy the experience. You will meet a lot of great people and experience football at the highest level at one of the most prestigious clubs in the world'." 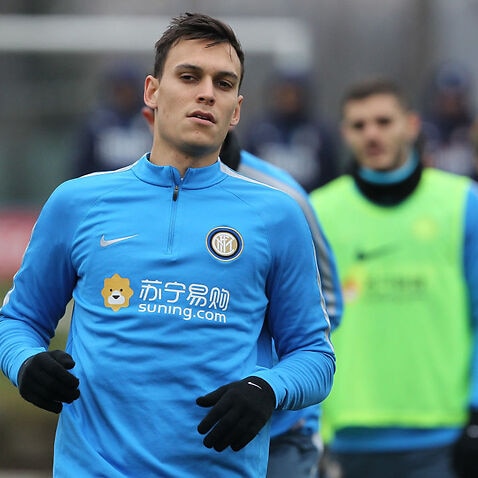 Sainsbury said the amenities at Inter were jaw dropping, some of which he had never seen in his career.

"The training facilities are unbelievable, the gym has all these types of machines I had never even seen before," he explained.

"The staff are very helpful and everyone has been very welcoming. Some players who can speak English have already given me their personal numbers and they told me if I need anything I should ring them. To be honest when I arrived I did not think it would be this easy to settle down.

"The club has put me up in a hotel and soon I will move into a flat in the city with my partner, who is still in China but will join me shortly.

"I've got a good feeling about the family-type atmosphere at the club so it's a case of so far so good."

Sainsbury got a fair idea of Inter's stature when they faced bitter rivals Juventus in Serie A at the weekend.

The publicity surrounding what is known as the "Derby d'Italia" before and after the match was eye-opening for this young, ambitious West Australian who left the comforts of his home to try his luck abroad and follow his dream.

"Inter are obviously a huge club and their magnitude has just started to hit me in the last few days," he said.

"I always knew Inter were big but you don't really realise it until you actually get here and see how much work their people do behind the scenes in terms of media coverage, for example.

"The coverage Inter generate is amazing and you could see this when they played Juve in the last round. They have hundreds of thousands of fans and some have already contacted me on social media.

"Inter are phasing me in in terms of media engagements. They are very careful about what comes in and out of the club. I've had requests for interviews locally but Inter are managing my commitments and have opted to take it one step at a time and waiting for me to settle in before I can talk to the Italian media."

Former Socceroos and AC Milan goalkeeper Zeljko Kalac has publicly warned Sainsbury that he needs to be thick-skinned to be able to survive in the pressure-cooker atmosphere of Italy's Calcio.

He said Sainsbury will be under a level of scrutiny that he has never faced but the defender is not overly concerned by the challenge. In fact he welcomes it.

"To survive in football at this level you've got to be thick-skinned, for sure. But, at the end of the day, I'm living and breathing so what more can you ask for than to be playing football for a living. Life's beautiful.

"It is a bit too early to talk about Inter's expectations of me but as far as I'm concerned I am determined to make this stay a success.

"I think the club is taking it slowly with me but I'm up for the challenge."