Real Madrid goalkeeper Thibaut Courtois has been in good form this campaign and feels his achievements have gone under the radar in Belgium.

Thibaut Courtois does not believe he is given enough recognition for his performances at Real Madrid in comparison to his time at Atletico Madrid.

After a difficult start to his Madrid career upon joining from Chelsea in 2018, Courtois has been one of Los Blancos' most consistent performers over the past two seasons.

He has kept 11 clean sheets in LaLiga this term – only Atletico's Jan Oblak has more with 12 – while no keeper has more shutouts (29) in the competition since the start of 2019-20, level with Oblak.

Courtois has been regularly praised by boss Zinedine Zidane for his game-saving heroics, but the 28-year-old does not believe his achievements are fully appreciated by everyone, particularly in his homeland. 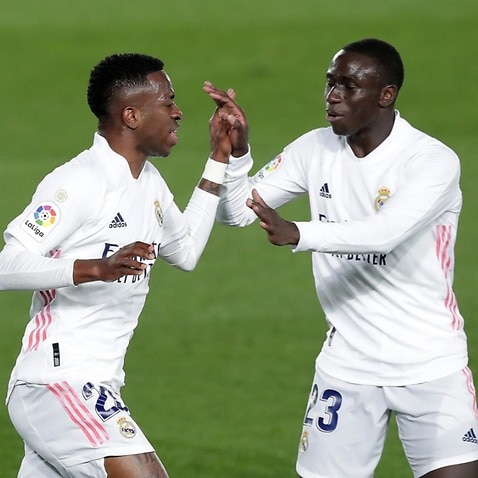 The Belgium international, who spent three seasons with Atletico before joining Chelsea and then Madrid, told HLN: "I had three fantastic years at Atletico. I received praise from all over Belgium. I became Sportsman of the Year and I thought it was good.

"Today I have the feeling that everything I do has become normal. My performance in that game against Real Valladolid, I think, seemed like it didn't exist.

"It seems that continuing to play at a high level at the biggest club in the world is no longer worth the effort."

Courtois initially struggled to hold down a place in Madrid's starting line-up amid repeated criticism in his debut campaign at the Santiago Bernabeu.

But he helped Los Blancos to the LaLiga title last season and produced a number of fine saves in his side's penalty shoot-out win against Atletico in the Supercopa de Espana final.

However, Courtois was pipped to HNL's prestigious 'Best Belgian Player Abroad' award in 2019-20 by Inter striker Romelu Lukaku – a decision he admits was difficult to accept.

"When you see where I've come from at Real Madrid... I survived a tsunami there," said Courtois, who is expected to start for Madrid against former side Atleti on Sunday.

"In 2020 I won the Supercopa with a decisive save in the shoot-out. And then I read from analysts: 'Courtois deserves the Belgian of the Year trophy less than Lukaku, because he was always with the national team while Courtois withdrew a few times'.

"I can understand that Lukaku was given the award for Best Belgian Abroad, but I also deserved it. I was also not nominated for Athlete of the Year.

"It's ridiculous. In fact, I feel more appreciation in Spain, and also outside of Spain, than in Belgium."