Southampton won comfortably, West Ham United saw red, Sampdoria was humbled while the game between Kukesi and Legia Warsaw was abandoned after 51 minutes in Europa League third round of qualifying. 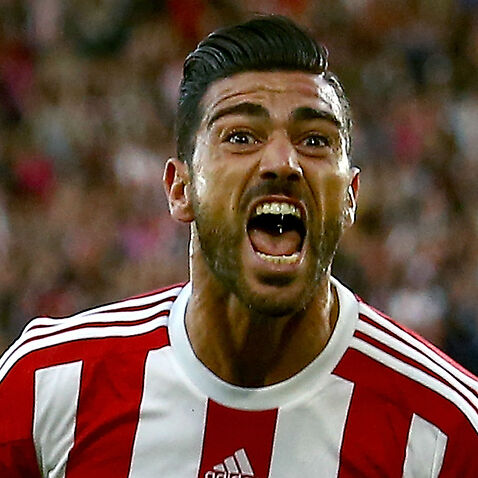 Ogbonna has a shocker on West Ham debut Europa League match abandoned after player is hit by projectile

Southampton made a convincing stride towards the group stage with a 3-0 win over Vitesse - Graziano Pelle and substitute Shane Long netting either side of a Dusan Tadic penalty.

West Ham appeared to be coasting to a similarly commanding home-leg victory when Enner Valencia and Mauro Zarate put it 2-0 up against Astra.

But Valencia departed with an apparently serious knee injury before James Collins collected a second booking in the 59th minute to become the third Hammers player to be sent off in five UEL qualifying games.

A rasping strike from Fernando Boldrin gave the Romanian team a vital away goal and then levelled the tie when West Ham debutant Angelo Ogbonna put through his own goal eight minutes from time.

Serie A side Sampdoria is heading for elimination after suffering a humiliating 4-0 loss against Serbia's Vojvodina.

Playing in the tournament after city rival Genoa withdrew its UEFA license appeal regarding the shared Stadio Luigi Ferraris not being up to code, Sampdoria fell behind in its 'home' leg at Turin's Stadio Olimpico when Mirko Ivanic crashed home a fourth-minute drive.

Aleksandar Stanisavljevic struck early in the second half and Sampdoria's misery was complete when Ognjen Ozegovic rounded off a brace in stoppage time.

The game between Kukesi and Legia Warsaw was abandoned after 51 minutes with the Polish side 2-1 to the good.

Midfielder Ondrej Duda fell to the turf while celebrating the away side's second goal, having been apparently struck by an object thrown from the crowd.

Around 20 minutes after the incident, UEFA's match delegate called the game off.

Borussia Dortmund won its first match under Thomas Tuchel thanks to Jonas Hofmann's 14th minute strike at Wolfsberger, although its Austrian opponent pressed hard to overturn a 1-0 deficit during the second period.

Javier Eraso hit a double of his own as Athletic Bilbao won 2-0 at home against Inter Baku, while AZ provided an Eredivisie success story as it overcame Basaksehir by the same scoreline.

Ligue 1 duo Saint-Etienne and Bordeaux were 3-0 winners away at Tirgu Mures and at home to AEK Larnaca respectively.

Rubin Kazan completed a thrilling 3-2 win at Sturm Graz, with Igor Portnyagin scoring a 61st-minute winner after the Austrian side twice came from behind.

There were 2-0 wins at home for FK Krasnodar over Slovan Bratislava, MSK Zilina against Vorskla Poltava and Hajduk Split over Stromsgodset.

Zorya Luhansk triumphed at Charleroi by the same scoreline and Atromitos was a 3-1 winner after a lengthy trip to AIK of Sweden.

PAOK Salonika and Rabotnicki won 1-0 at home to Spartak Trnava and Trabzonspor respectively, while Dinamo Minsk did likewise at FC Zurich.

The games between Thun and Vaduz and Brondby and Omonia Nicosia finished goalless, while Apollon Limassol and FK Qabala drew 1-1 ahead of next week's second legs.