It was a night to forget but Melbourne Victory coach Jeff Hopkins believes a fearful hiding by Brisbane in January sparked his team's charge to the W-League grand final.

Victory had the last laugh over the Roar in Sunday's semi-final at Lions Stadium, storming into their first decider since 2014 with a comprehensive 6-2 win.

Veteran forward Lisa De Vanna scored a game-defining double before Melina Ayres notched a second-half hat-trick in a win as comprehensive as the scoreline suggests.

Hopkins says that 6-0 humiliation at the hands of the Roar three months ago was a big part of the form which had got his team one win away from the championship. 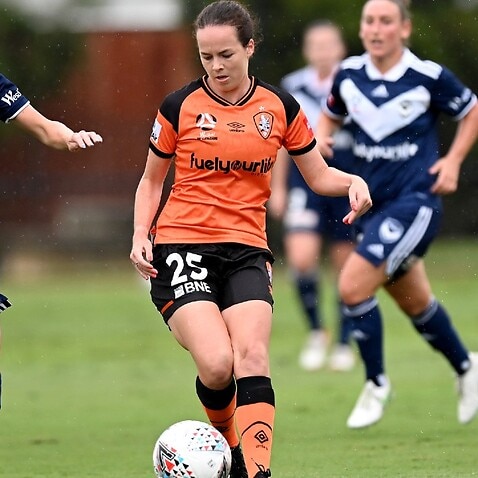 "The last game we learned a big lesson up here, the 6-0 defeat and since then we've been a different team," Hopkins said.

"We had to make a few changes in the way we went about things.

"It was great for us first of all to win the game - that was the number one thing - but the way that we did it was even more important for us."

Victory will now play the winner of Monday's semi between premiers Sydney FC and Canberra United.

Despite falling short against Sydney last week in a showdown for the premiers plate, Hopkins says his team will head into the grand final with no fear regardless of the opponent having won seven of nine matches since the thumping by the Roar. "I thought we were quite even the other night against Sydney ... we lost from a penalty and a free-kick so two set plays," the two-time championship-winning coach said.

"Apart from that, I thought we were easily on par with them.

"They've now got to get through but again that's going to be no easy game, Canberra is a very, very good side as well which we learned early on in the season.

"It's good to know that we're there. That's the main thing and we can sit back tonight and wait and see."