And while Charlton's move for the 39-year-old comes after Crawley's unprecedented mid-season revival - to put them within touching distance of the final League One promotion play-off spot - Kewell's men aren't ready to say goodbye just yet.

"We have heard the rumours in the media, and hope they are not true," Crawley captain Smith told Fox Sports.

"I would be disappointed to see him leave, because we have a great relationship. It would be really sad." 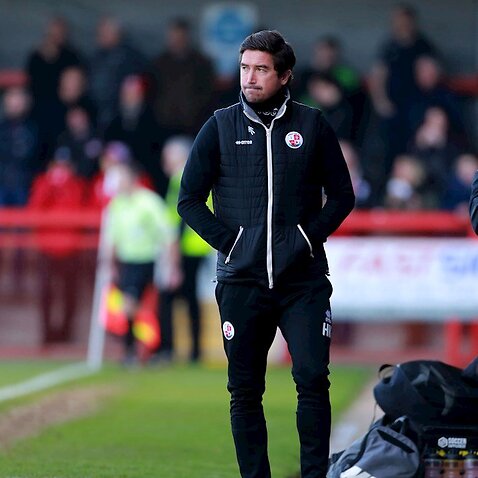 After a two-year stint as coach of Watford's Under-23s, Kewell took up his first senior professional coaching gig wanting to implement a philosophy built on hard-work and passing.

And despite a rather rocky rapport with fans at the beginning of the season, it didn't take the former Liverpool and Leeds United winger long to win his players over.

"Back in August, I saw a newspaper story that predicted we would finish second from bottom in 23rd place, so no one gave us a chance of doing anything," Smith said.

"But the manager has come in and helped us exceed all expectations. He gave us a new identity, a winning mentality, and we have come a long way under him."

"Everyone would be gutted if he left," Connolly added to Fox Sports.

"He is one of the best managers I have worked with. Crawley chief denies Kewell has been poached by Charlton

"It is incredible this is his first job, because he has dealt with everything brilliantly, and acts as if he has been doing this for the last 10 years."

While the Crawley squad know full well that the Australian's time with the League Two outfit could be coming to a close, they are hopeful that he will remain at the helm for just a little longer.

"I can see the manager going on to bigger and better things, but I hope we can keep hold of him at Crawley Town for a little bit longer," Connolly said.