Western United's charismatic captain Alessandro Diamanti revealed that a deep rooted passion for the game that is embedded in his generation of players is driving him to perform at the highest possible level at the age of 37.

The former Italy midfielder joined United last season and helped the Victorian club reach the playoffs before they lost 2-0 to Melbourne City in the semi-finals.

United's success in their maiden season owed much to the class and leadership of Diamanti, who set the A-League alight with a string of spectacular displays and extraordinary goals.

He was rewarded for his exploits by being named the Johnny Warren Medallist as player of the year.

Diamanti said there is no secret behind his longevity: just a passion for the game he fell in love with after he kicked the first ball in his hometown of Prato, Tuscany.

"My approach to football is no different to that of guys like Gigi Buffon, Giorgio Chiellini, Leonardo Bonucci, Zlatan Ibrahimovic and Cristiano Ronaldo," Diamanti said.

"I am not having a go at the young players of today because I really cannot complain about the professionalism of the younger members of the United squad, for example.

"However when it comes to the mentality of the older and younger generations, not just in Australia but all around the world, there is no comparison. 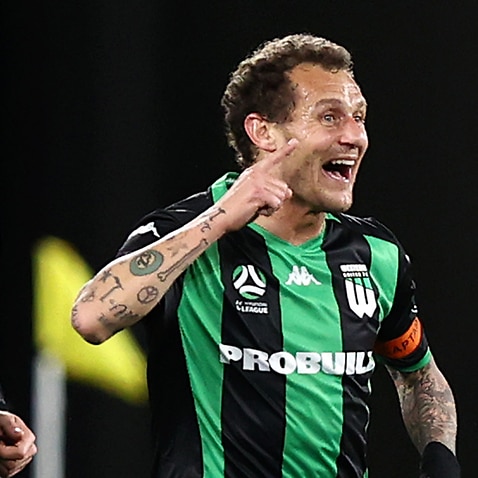 "Our older generation comprises players with a hunger for the ball and passion for the game. It's a love that never left us since we were children.

"My passion is actually what enables me to give everything in every game at such a late stage of my career.

"I have to work harder now however because I am not a spring chicken any more. And there is this little matter called pride that keeps me going, too."

So is he inspired by the feats of veterans like Ibrahimovic, 39, and North Macedonian Goran Pandev, 37, who are still going strong at the highest level?

"I am not the type to be inspired by anyone," he said.

"My inspiration comes from the way I go about my profession as a footballer.

"For us 'oldies' football is the first priority and it is what makes us get out of bed every morning."

Diamanti said he was fully satisfied with the achievements of his new club on and off the field.

He said he expects more of the same in the forthcoming season that kicks off on December 27.

"Last year our aim was to grow as a player group and raise the club's profile in the football community. And I think we have succeeded on both counts," he said.

"In our second season we want to keep improving and become a serious player in Australian club football.

"It certainly will be difficult but we are working with enthusiasm and confidence. And when you prepare well physically and mentally and have a strong playing style you can aspire to great things."

Diamanti flatly refuted a suggestion that United would find life in the A-League harder than last season because the surprise element will not be a factor any more.

"I do not buy this one bit," he retorted. Dazzler Diamanti snubbed Serie A to play in the A-League

"We might have been an 'unknown' for our first three, four or five matches and caught a few people by surprise but after that everybody knew what we were about.

"It will be just as hard for us as it was last season because the competition is tough, no doubt about that."

Circumstances forced Diamanti and his family to remain in Melbourne when the season was suspended due to the coronavirus and after the truncated competition ended.

But they were not complaining because life in Australia suited them.

"I remained in Melbourne when the A-League was stopped in March and also when the season finished in August firstly because I knew that my parents, relatives and friends in Italy were okay and secondly since I had signed an extension with the club I was afraid that if I went back home myself and my wife and kids could have had visa issues in returning to Australia," he explained.

"It just was not worth it so we stayed in Melbourne. I missed out on my holidays but I lost them for a good cause and we were happy to stay here, anyway. Lockdown was not that hard, to be honest."

Diamanti is also keen to learn more about Australian football and particularly Warren, after whom the medal for best A-League player is named.

"I know that Johnny Warren was once the captain of the national team and he did a lot for the game's development here," Diamanti said.

"I would like to read his book (Sheilas, Wogs and Poofters) to discover more things about the man whose name is on my medal and about football in this beautiful country. I have been received very well here and it would be silly not to do so."