Denmark's Euro 2020 match against Finland on Sunday should not have restarted following the cardiac arrest suffered by Christian Eriksen, according to head coach Kasper Hjulmand.

Inter midfielder Eriksen was given CPR by medics in the first half of the Group B match after falling to the ground with no other player around him.

The fixture was originally suspended, but Eriksen was later confirmed to be "awake" and the game resumed a little under two hours later, with Finland winning 1-0 in Copenhagen. 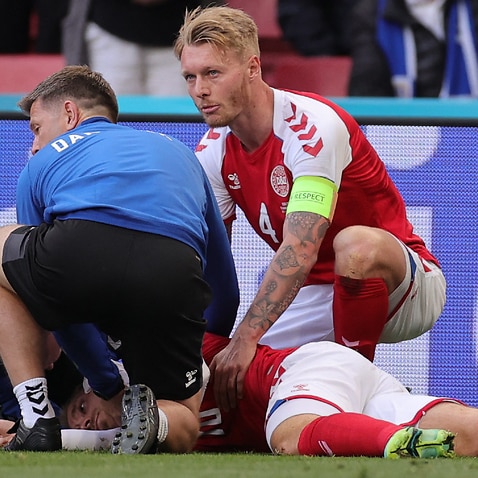 Boesen said the 29-year-old "was gone" before being resuscitated.

The players only agreed to finish the game once they had been assured Eriksen was in a comfortable condition, with Hjulmand revealing after the game that they had also been given the option of resuming the match on Sunday.

Speaking at a media conference on Monday, Hjulmand said it was not right that his players finished the game so soon after going through such a traumatic experience.

"No, we should not have played," Hjulmand said.

"Players have different reactions to shocks and trauma but we'll try to get back to normal as much as possible.

"I get the feeling from the players that maybe the time is too short to try to play football again, but maybe we can use it as a force to get together and try to go out and do our best in the next match."

"They should have tried to work out a different scenario and shown a little bit of compassion, and they didn't," he told BBC Radio 5 live.

"That would be the worst two hours of my time in football.

"Something terrible like that happens and UEFA gives the players an option to go out and play the game or come back at midday on Sunday. What kind of option is that?

"The result of the game is completely irrelevant. I mean, how can you play?"