The former A-League double act of John van’t Schip and Michael Valkanis are facing a critical five days in their quest to move the dial with Greece and satisfy cravings for success in one of world football’s most turbulent territories.

Finishing top of their Nations League group would lift the Ethniki into a more favourable pot for December’s FIFA 2022 World Cup qualifying draw, and provide latitude for the pair, who worked together at Melbourne City and PEC Zwolle in the Netherlands before Greece came calling.

To deliver on expectations, Greece must beat Moldova away on Monday morning (AEDT) and then topple League C Group 3 leaders Slovakia three days later in Athens.

Greece are unbeaten with eight points from four games, with van’t Schip and Valkanis - who took charge 14 months ago - ushering in a gallery of fresh faces and a fresh attacking approach to steer the national team away from the deeply embedded defensive roots which have largely characterised Greece’s approach since winning Euro 2004. With change comes risk but Valkanis believes a refashioned Greece is on the right path, whilst acknowledging the importance of the next two games.

“These are really finals for us to try and finish top of the group and get into a higher-level group,” Valkanis told The World Game.

“We have been getting some decent results and playing some really good football, which is our prime objective.

“By playing that way we believe we’ll get the results we want.

“We’re also at a stage where our new young team need an important test like this, where they’re in a pressure situation.

“These sort of games will help with their development.”

With Greece missing out on Euro 21 - the damage was largely done before van’t Schip and Valkanis arrived - Valkanis acknowledges the “pressure” is on to produce results.

“There’s always that aspect to football,” he said. “We know it’s ultimately all about results.

“But we want to get those results playing a certain way and with a particular identity.

“What we’re trying to accomplish is producing positive feedback but there are also always critics in the media.

“We got a bit of that when we drew 0-0 with Kosovo last month in a game we should have won by five.

“We missed a penalty, which didn’t help, but the amount of chances we created was phenomenal

“It’s when you don’t create chances that you start to worry. We’re looking at things in terms of growth and development and we’re excited to see some really good signs.

“We’re becoming a team known for an attacking style.

“Our opponents can see that and you can see how they’re adapting to us.”

The average age of the Ethniki has dropped from 28 to 24 under the new regime, with energy and intensity their calling cards.

Whilst concentrating on football that’s “good to watch” in seeking to make Greeks and their diaspora “proud”, Valkanis said the defensive arts haven’t been abandoned along the way.

“Football has changed quite a bit in the last few years and even masters of the catenaccio like Italy are playing a more progressive modern style,” he added.

“The game has evolved but the one thing we don’t want to lose is our strength and fighting spirit to win the ball.

“Greeks like the defensive part of the game, so we’re quick to try and get the ball back the moment we lose it with our pressing game. 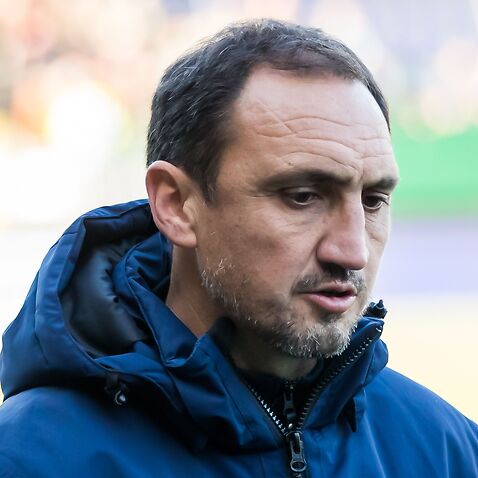 European coaches are no different to us, claims Valkanis

“You won’t see us sitting as deep as you did in the past.

“We’ve given a lot of belief in the players and the quality they prossess.

“It’s a bit like in Australia where we weren’t just physical and good at running all day, we also had some good technical players.”