Veteran Matildas striker Lisa De Vanna still has the desire to continue her long and illustrious international career and says she must plan playing commitments carefully to look after her body.

De Vanna started a guest stint with W-League club Canberra United on Tuesday, as she prepares to get herself in shape for the 12-team Algarve Cup competition the Matildas will contest in Portugal in March.

She turned out in the last three matches of the inaugural NWSL season of American club Orlando Pride, coached by her old Matildas mentor Tom Sermanni.

Their season ended in late September, since when De Vanna hasn't played, but the well-travelled forward has now joined her sixth senior Australian club. "I had a bit of a break, I want to focus on my coaching and I want something different," De Vanna told AAP.

"So I decided to come to Canberra, where it's a good team environment.

"It's a place that I've been training for the last two years and it's just completely football, because my main goal is to be ready for the Algarves."

De Vanna has amassed 117 caps and 40 goals since her Matildas debut in 2005 and her appetite for international competition clearly hasn't been sated.

Quite apart from her travels across Australia, De Vanna has played for several American clubs and a couple in Sweden, all in the space of less than a decade, and has had her share of injuries.

"I'm 32 years old so I have think carefully about what I do next because I need to look after my body," she said. 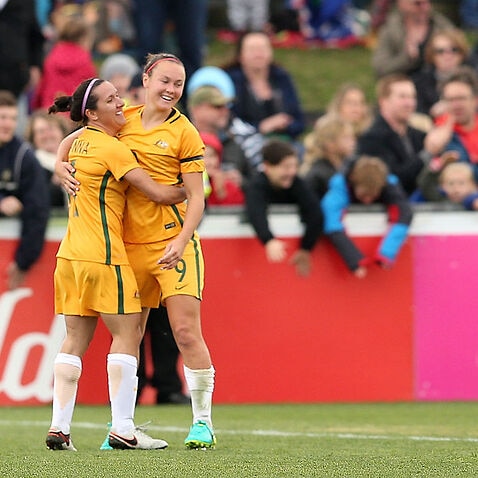 "I really enjoy playing for my national team, so for me to do that at such a high level, I need to look after my body."

De Vanna had no opportunity to exert a major influence on her first game for Canberra United in their 6-1 away loss to W-League leader Sydney.

She was injected into the game on the synthetic Lambert Park surface just before the hour mark with her team trailing 4-0.

"But when it's four or five, all you can do is just keep working."