Western United captain Alessandro Diamanti, the 'smiling assassin' who will be remembered as one of the A-League's finest imports, revealed he knocked back an offer to join a Serie A club because he could not refuse the new challenge of playing in Australia.

Diamanti, 37, joined the A-League's newest club in their first year last July and has led them to the finals with two matches to spare.

The Italy international, who featured in the 2012 European Championships, feels his success down under has justified his decision to snub one of Europe's major leagues in favour of the A-League.

"I was playing in the second division last year and I had a few offers to return to Serie A," Diamanti said.

"I was just about to sign for a Serie A club that was in the top half of the table when I got a call from Western United who explained to me their ambitious project that had me as the team's centrepiece. 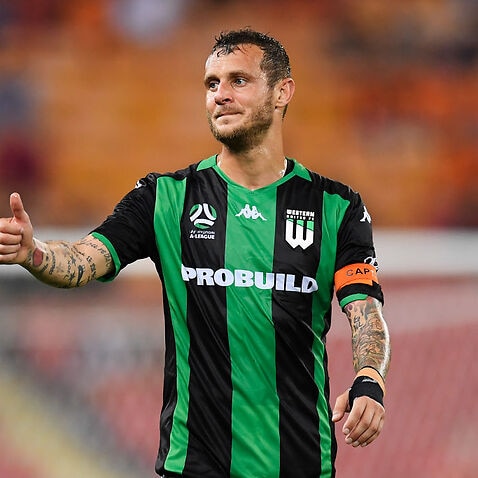 "It was a fascinating prospect because, let's face it, another season in Serie A would not have changed my life. I would have made a few more bucks in Italy but at this stage of my career these things do not matter a great deal.

"I saw the opportunity as a new experience for myself and my family and we came here with an open mind.

"It was an easy decision - a no-brainer really - especially for a player of my age."

Western United's acquisition of Diamanti did not come easy.

Sources revealed no attempt was made by any A-League club to sign Diamanti before the Western organisation last year applied for financial assistance from Football Federation Australia via the special marquee fund.

Western's overtures were knocked back because the governing body did not deem the Italian maestro as famous enough for marketing purposes.

The club had no other alternative but to go it alone.

Diamanti said he knew very little of what was going on behind the scenes but when asked if he was surprised by the governing body's stance he said simply: "They were right!"

"Anyway, I really cannot comment on this because I did not know the ins and outs of the case.

"To be honest, this did not concern me too much because I was close to coming here and I was able to sign for the club. This is life."

Diamanti was signed on a one-year deal but has since extended his contract for another two seasons.