Former Australia international David Zdrilic is prepared for anything after the COVID-19 inspired unorthodox start to his coaching career at Chicago Fire.

David Zdrilic has no plans to follow Tom Hanks' lead. Hanks, playing a character marooned alone on a deserted island in the 2001 Oscar-nominated film Cast Away, began chatting away to a volleyball named 'Wilson'.

"I've got a football with me, but I haven't named it yet," Zdrilic laughed during a lockdown interview with AAP.

You could understand it if the Sydney-born former Socceroo and newly appointed assistant coach for the Chicago Fire FC had started chatting with the sports equipment.

He has been holed up in his Chicago apartment since the introduction of stay-at-home orders on March 21 to restrict the spread of COVID-19, which has so far infected nearly 40,000 people and caused more than 1,800 deaths in the city.

Zdrilic does not have friends or family staying with him but is in regular contact via video conference with the Fire's other coaches and players.

"You are allowed to go outside and go for a run and get groceries, but there's no real businesses open except for grocery stores and it is only take-out at restaurants," he said. 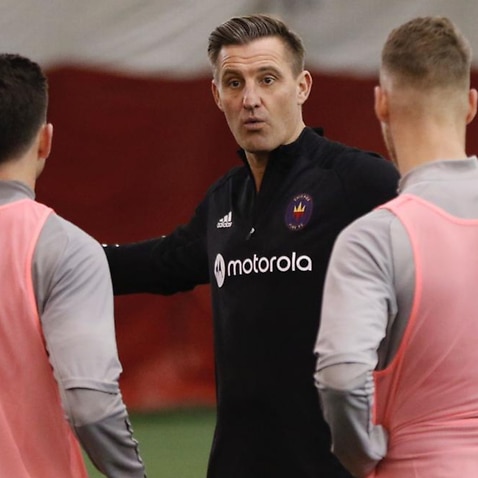 Chicago was the project I couldn’t turn down, says Zdrilic

Despite the unusual start to his life stateside, Zdrilic is not complaining.

He is excited to be taking the next step in his coaching career in North America's Major League Soccer (MLS) with the Fire, who share the iconic Soldier Field stadium with NFL giants the Chicago Bears.

The season opened on March 1, the Fire had a loss and a draw in their first two games before the pandemic forced the MLS to halt all games until at least June 8.

Zdrilic is one of many new faces at the Fire this season after the team missed the playoffs last year and underwent a major overhaul of players and coaches.

German midfielder Bastian Schweinsteiger - formerly with Bayern Munich and Manchester United - and Hungarian striker Nemanja Nikolic are no longer with the team, while ex-Switzerland international Raphael Wicky has taken over coaching duties, with Zdrilic arriving as his assistant.

The MLS - like the National Basketball Association - is eyeing Florida's Walt Disney World as a potential site to bring all 26 teams together to play games without spectators. The first game could be early July.

"We're just continuing with our programs and if that happens, great," Zdrilic said of the restart option. "We're prepared for whenever we get the go ahead." Covering FIFA World Cups and analysing games from a different perspective opened his eyes to football in a new way and led him down the coaching path.

"It fuelled my desire for knowledge and expertise," he said.

The Fire have looked to take the positives out of the pandemic-enforced restrictions, the Australian explained.

"We've been quite creative with our coaching team," he said.

"Straight away a routine was set, with a meeting every morning and different tasks we set ourselves.

"The players have had a training program from day one."

To kill time and stay active during the pandemic the Australian has taken up jogging, something he had avoided since his playing career ended in 2010.

"In Germany we used to run a lot, so when I finished playing I was like, 'I'm not running any more'," he said.

"I'm about 1km away from Millennium Park (in downtown Chicago) so I try and go around the whole park and that's enough for me."