Patrick Cutrone extended his scoring streak to three starts on the spin as AC Milan advanced to the UEFA Europa League group stage with a 1-0 second-leg win over Shkendija.

The 19-year-old struck for the second time in a week as a measured Milan settled for a dominant 7-0 aggregate victory.

The visitors' progression was in little doubt after last week's 6-0 win at San Siro and Vincenzo Montella responded by making eight changes to the side which beat Crotone 3-0 on the weekend.

Leonardo Bonucci, Manuel Locatelli and Cutrone were the only players to survive and the latter continued his hot streak by extending Milan's advantage in the 13th minute.

The two-legged success also confirmed the Rossoneri's first appearance in the main draw of European competition since they reached the Champions League last 16 in 2013-2014.

Cutrone scored just 18 minutes into his first Serie A start against Crotone and the striker almost got on the scoresheet inside five at Ecolog Arena, seeing his hurried left-footed effort cleared off the line after the hosts gave the ball away deep in their own half.

Ferhan Hasani found space outside the area at the other end but dragged his shot wide of Marco Storari's goal, while Besart Ibraimi also fired wide in a sign of Shkendija's intent.

It was Cutrone, through, who opened the scoring inside 15 minutes, springing the offside trap and wrong-footing goalkeeper Kostadin Zahov before finishing low into the bottom far corner.

The Italy defender struck a would-be tackler when attempting an audacious long-range shot, but quickly returned to the pitch to ease any injury fears.

Shkendija spurned two good chances to restore parity on the night as Ibraimi first curled wide of the top corner before Armend Alimi poked a one-on-one straight at Storari.

Hasani next found joy in behind Milan's defence but the Shkendija skipper took too long to steady himself in the area and allowed a covering Bonucci to snuff out the chance.

Storari, deputising for the rested Gianluigi Donnarumma, further proved his worth with a pair of impressive saves low to his right, initially from Alimi and then from Ibraimi's carbon-copy attempt.

Milan steadied throughout the final 20 minutes and, after withdrawing Locatelli and Cutrone, completed a handy tune-up for this weekend's Serie A clash against Cagliari. 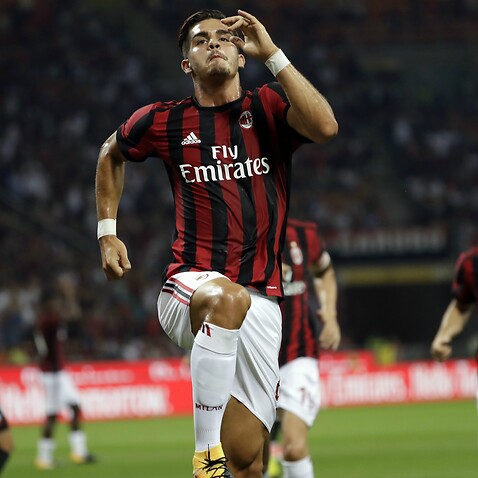