Australia defender Milos Degenek revealed he never gave up hope of realising his dream of playing for the Socceroos after leaving a strong impression in the international victory over Greece.

Degenek partnered his old colleague from the Australian Institute of Sport, Trent Sainsbury, in the centre of the Socceroos' defence and barely put a foot wrong in a 1-0 victory on a poor ANZ Stadium pitch. Croatia-born Degenek played the whole match against the former European champions after making his international debut against England in Sunderland, when he came on as a second-half substitute.

In both matches he showed a level of composure that belied his relative inexperience at international level.

Degenek has played for Australia and Serbia at junior level but has chosen to play for the green and gold.

It's a decision that has provided a win-win situation for both parties because he has fitted in nicely in Ange Postecoglou's national squad, providing the coach with another strong contender for a defensive role.

"A long as I'm breathing I won't give up, man," Degenek, 22, said after the Greece match that was decided by an injury-time goal from substitute striker Mathew Leckie.

"You have to believe in yourself in what you do and everything will come, eventually.

"I knew I would get the opportunity but I was not sure when I would get it. I'm glad it came now." 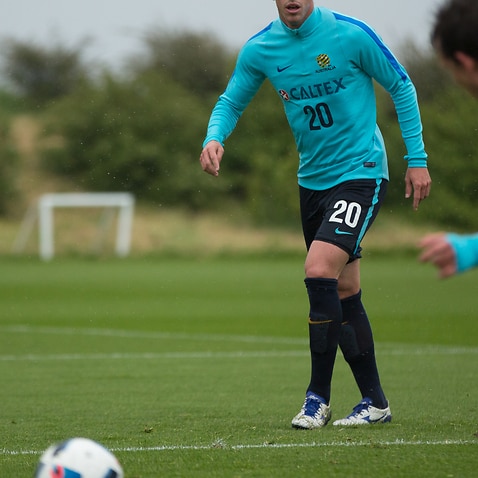 Degenek, who plays his club football for 2.Bundesliga club 1860 Munich, said he was impressed with the national squad set-up.

"The environment in camp is incredible, better than I expected," he said.

"It's something I barely get at my club but here it is one step above.

"The information we get from the coaches is amazing, the way we play and do things is really good. The boys here are really good and I cannot speak highly enough of them as a squad. They are a group of top, top professionals.

"I was not really nervous ... if anything they were good nerves, which is normal.

"I have played in big games for my club although this probably was one of he biggest I've played in my life.

"This is very good (moment) for me because the things the coach asks us to do and the players I play with make me feel more comfortable. It makes my job a lot easier.

"I prefer to play as a centre-back but I can play at No. 6 as a holding midfielder and as a right full-back.

"It's a matter of where the coach sees me and where he needs me. I'm comfortable pretty much along the back four and in midfield." Degenek joins a long list of quality defenders who are vying for spots in the team as it prepares for the final part of its campaign to qualify for the 2018 FIFA World Cup in Russia.

Degenek, as a player of a famous German club, would be used to strong competition for places every week even though he concedes that there is big difference between club and international football.

"That's normal in football to have competition everywhere," he said.

"If you don't have competition the team cannot develop. Everyone has to play well week in week out."

Sainsbury said he was pleased that his newest central defensive partner had acquitted himself so easily to international football.

"It was very good playing with Milos again," Sainsbury said.

"We were together at the AIS although I was a year ahead of him.

"He slotted in seamlessly and did his job well tonight as did the other youngsters at the back. It was probably one of the younger back-four in the Socceroos history so a clean sheet and victory over Greece is good.

"I let Milos run his race. We only spoke about a few little things during the game."