Italy made a commanding return to major tournament football as they opened Euro 2020 with a comfortable 3-0 win over Turkey at the Stadio Olimpico in Rome on Saturday.

The Azzurri failed to qualify for the 2018 World Cup but have since rebuilt under Roberto Mancini, who appears to have transformed them into a credible force that dealt with one of the competition's supposed dark horses with relative ease.

Not that it was all plain sailing, however. Andrea Bocelli's pre-match rendition of 'Nessun Dorma' – or 'let no one sleep' in English – was seemingly not heeded amid a dour first half, though one flashpoint just before the interval saw Italy denied a penalty.

Mancini's side eventually opened the scoring soon after half-time as Juventus defender Merih Demiral scored an own goal and, given the lack of threat posed by Turkey, subsequent strikes from Ciro Immobile and Lorenzo Insigne were probably not even necessary.

Turkey relied on counter-attacks 26 per cent more than the average in qualifying, according to Stats Perform's Playing Styles model, and their deep setup contributed to a cagey opening.

But Italy started to probe with greater intent and saw Insigne shoot just wide after a one-two with Immobile in the 17th minute, before Giorgio Chiellini – now the oldest outfielder to ever start a major tournament game for the Azzurri – drew a stunning save from Ugurcan Cakir with a powerful header.

Turkey were then arguably fortunate not to concede a penalty just before half-time, VAR deeming there to be no clear error when Zeki Celik handled Leonardo Spinazzola's cross.

Although Cengiz Under was introduced at the break, Turkey's gameplan showed no change and Italy deservedly made the breakthrough in the 53rd minute as Domenico Berardi left Umut Meras on his backside and smashed the ball across goal, with Demiral diverting it into his own net.

Cakir could not hold on to Spinazzola's shot and Immobile was on hand to coolly tap in the rebound to make in 2-0 just past the hour.

And Insigne wrapped things up 11 minutes from time, curling home after being teed up by Immobile as the Azzurri netted three times in a single game for the first time in European Championship finals history.

What does it mean? Italy make a statement

It was always going to be an intriguing first test for Italy because, in many ways, it has been difficult to get a real measure of how good they actually are. Although they averaged 3.7 goals per game in qualifying, the majority of those came against poor opposition.

Here they were up against a Turkey side who had only let in three goals in the qualifiers and boasted arguably their most talented squad since Euro 2008, when they reached the semi-finals.

But Italy did not let their opponents breathe. All over Turkey from the outset, the goals were bound to arrive eventually – thankfully for Mancini, they did, securing the largest win ever in a tournament opener at the Euros. 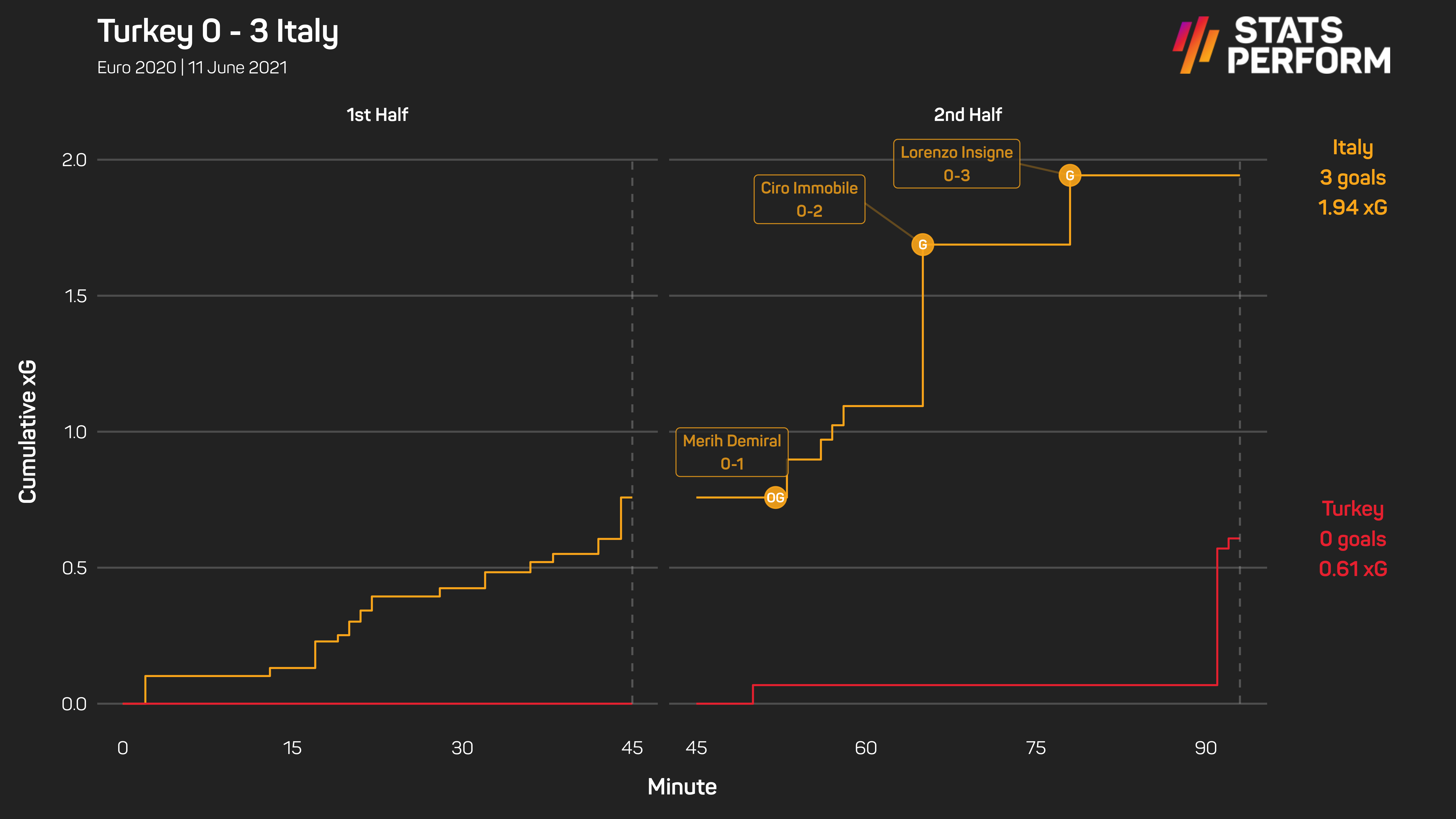 All of Italy's starting front three were excellent: Immobile with his poacher's goal, shooting frequency (a game-high six) and link-up play, Berardi with his unmatched five key passes, and Insigne just about the pick of the bunch.

The Napoli star was a joy to watch as he glided around the pitch. He had five shots and also created three chances, showing his versatility in that respect, with his lovely finish for the third an obvious highlight.

It was a day to forget for most Turkey players, but particularly those at the back. Caglar Soyuncu was especially disappointing, winning none of his four duels and giving away four fouls – more than anyone else on the pitch. Neither an assuring presence nor effective in defence, he failed to make any tackles or interceptions as well.

– Italy have now won their opening match at each of their past three major tournaments, beating England at the 2014 World Cup, Belgium at the 2016 Euros and now Turkey. This 3-0 win was the biggest margin of victory in the opening match at a European Championship tournament.

– Italy are unbeaten in their last 28 matches in all competitions (W23 D5), only enjoying a longer run once previously, going 30 without defeat between November 1935 and July 1939.

– Demiral's own goal was the first time ever the first goal at a European Championship tournament had been an own goal.

Italy are back at the Stadio Olimpico on Wednesday as they face Switzerland soon after Turkey tussle with Wales in Baku.