After 11 weeks on the sidelines, Matildas defender Steph Catley is finally ready to show FA Women’s Super League followers what they’ve been missing.

Catley is fit to face Birmingham City on Monday morning (AEDT) after overcoming a frustrating calf injury, as Arsenal Women chase a victory which would narrow the gap to league leaders Manchester United to just a single point.

Her compatriot, coach Joe Montemurro, will decide whether to throw Catley, 26, on from the start or wean her back into the action off the bench.

Either scenario will be fine with the ex-Seattle Reign and Melbourne City left-back, who is simply overjoyed to be “feeling like a footballer again” after spending more time in the rehab room than on the training pitch since joining the Gunners in July.

Catley initially incurred the injury in pre-season, and in her second WSL appearance suffered concussion against West Ham United. 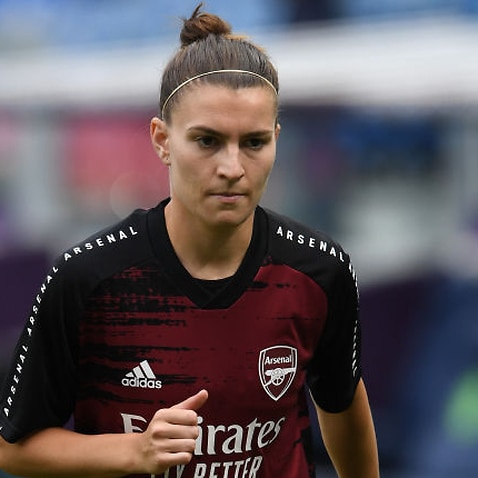 The calf problem flared again days later - and she hasn’t played since.

“It’s been really frustrating dealing with the injury - but I’ve been back in full training and I’m ready to play again now,” Catley told The World Game.

“I pulled my calf in pre-season, did the rehab and got back from that. Then I got concussed in the West Ham game and because of the concussion protocol I wasn’t able to train for three or four days.

“Unfortunately, the first session back my calf went again. Hopefully, touch wood, I’m on the other side of all that now.

“I’m itching to get back - as soon as it happened I was very disappointed but I’ve been out there training with the girls and it's nice to feel like a footballer again. I’m excited.”

With fellow Matildas Lydia Williams and Caitlin Foord also on board, the Gunners’ changing room has become an Aussie outpost.

“The club is unreal, everything is at such a high level and there are amazing players here,” Catley added. “Having a little touch of home helps also.

“I’d say the competition is up there with the US league, although the States is probably slightly ahead in terms of every team being able to compete with another on any given day.

“Over here there is still quite a difference between the top four or five teams as compared to the lower two or three.

“But in terms of the calibre of players here in England, it’s an absolutely incredible league.

“The training environment alone has been by far the best I’ve ever been involved with in terms of the quality of players and the intensity you see every single day.”

Dubbed by some commentators as the world’s best left-back in the making, Catley is looking to set tongues wagging again.

“I feel like the last two or three years I’ve been building towards some career-best form for sure,” she said.

“But then COVID happened, the injury happened and all of a sudden you feel like you’re back to square one.

“To be the best in the world in your position is always something you want to strive for and it’s something I’ve always aimed at.

“But right now I just want to tick off the basics and get back on the field and do the best I can for this team.”

With ex-Melbourne City turned Sutton United goalkeeper Dean Bouzanis as her partner, Catley lives football 24/7, whether she likes it or not.

“I’m the kind of person that goes to training, loves football and enjoys every minute of it - but then goes home and likes to switch off,” she said.

“Whereas Dean is absolutely obsessed with football and wants to be around it non-stop.

“He’s watching everything on TV and listening to everything, so our house is basically surrounded by football.”