A handful of Australians could realise a lifelong dream when the Women's Champions League quarter-finals kick off in Spain this weekend.

Australians are in the mix to feature in all four quarter-finals, which, like the men's equivalent, are single-leg knockout games.

"Every game's a cup final and hopefully there are three successful cup finals for us to bring home the trophy," Montemurro told AAP. 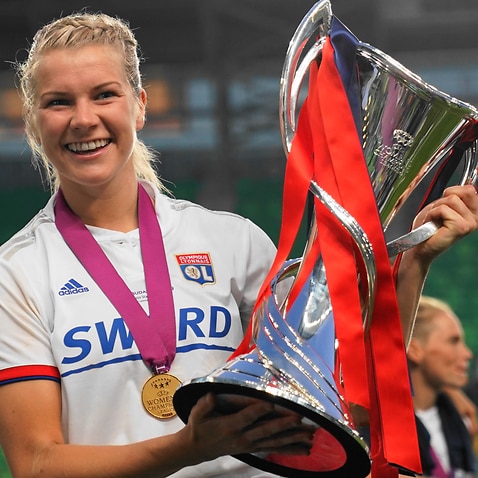 How to watch the UEFA Women's Champions League final on SBS

"But it's just an amazing excitement, an amazing opportunity to be representing this great club at the pinnacle of club football and obviously to be there as an Australian coach at this level of the game is also a real honour and I'm really humbled by it.

"There are probably things in your coaching journey that you think would never happen ... I'm still pinching myself that I'm at a club like Arsenal and coaching in the Champions League."

As Arsenal finished third in the FAWSL, they need to win the Champions League to qualify for next year's tournament.

January signing Foord could start against PSG but Catley and Williams only arrived in July and are less likely to feature.

There could also be a tournament debut for young gun Ellie Carpenter, who joined champions Olympique Lyonnais in June.

"It was always a dream of mine to play in the Champions League and one of the reasons why I came to Lyon was I (wanted) to compete in that league and compete against the best clubs in Europe," Carpenter told AAP.

"It's such a prestigious tournament - it's the best teams in one place and you've got to be the best to win.

"So it's going to be very interesting and (there are) a lot of tough games coming up but it's really exciting and I guess I get to fulfil that dream."

Olympique Lyonnais have won the competition six times, including the past four titles - meaning their quarter-final against Bayern Munich is business as usual.

With England star Lucy Bronze a lock at right-back, Carpenter would likely feature off the bench, if at all.

Aoife Colvill could line up for Glasgow City alongside Scotland's Samantha Kerr - the lower-profile namesake of Australia's captain - against VfL Wolfsburg.

Midfielder Alex Chidiac has been named in Atletico Madrid's squad to face Barcelona but has been on the comeback trail from a long-term ankle injury.