The upcoming blockbuster MCG clash between Brazil and Argentina may have Australian football fans giddy with excitement but Brazil coach Tite admits his side would rather not be playing the match.

Before his recent sacking as Argentina coach, Edgardo Bauza also made it clear that he was not thrilled by the prospect of travelling all the way to Melbourne to meet Brazil on June 9th.

“Because it comes after the club season the players don’t really want to know about it," Bauza said last month. "They want to go on holiday, they’re planning which beach they’re going to be lying on with their women. And then you tell them that they have to go to Australia!

“I ran into [Brazil coach] Tite in Europe recently, and I asked him if he wanted to go and play the game. He said that he didn’t. ‘Ok,’ I told him, ‘let’s play out a 0-0 draw so neither of us gets attacked by our press.’ And we burst out laughing.”

Tite has now confirmed this version of events. He, too, would rather not be playing the game – although in his view, the venue is less important than the opposition.

”Rather than Argentina, we would rather be facing a European team," he said in an interview published on Tuesday in Brazil’s sports daily ‘Lance!’

"I said this to Bauza and he agreed. We’re already playing each other in World Cup qualification, so it would be more interesting to face other opposition. But the match has already been organised.” The observation of Brazil’s coach is based on two factors.

Firstly, that since the 2014 World Cup, both under him and his predecessor Dunga, Brazil have played the vast majority of their matches against opponents from their own continent – the exceptions being a run of friendlies in 2014/5 against Japan, Turkey, Austria and France, and a few games against Central American teams. They need to face other schools of play.

Second, Tite is well aware that the Europeans have come out on top in recent World Cups – and with the standard in South America lower at the moment than in previous campaigns, the best teams from Europe are likely to provide the strongest opposition in Russia next year.

Tite admits that his focus has been on the South American qualifiers. But now that his team have already booked their place in Russia, he's shifted his attention to preparing as best he can - and that means testing the side against European opposition.

“I’m going to be studying Europe in more depth," he said.

"I like the look of France, who have a young team, quick to turn defence into attack. Italy have their history, Spain have maintained a level despite going through changes.

"Germany make changes but the structure stays in place. We’ve never seen a Belgium team with so much quality. I’d like to be facing these kind of teams before the World Cup.”

There are few international dates available. Brazil have four rounds of World cup qualifiers still to play, where Tite can carry out experiments in a competitive setting.

There are FIFA dates in November, and next March. Brazil are setting up matches with Germany and France, but Tite would have preferred to have had June available for a meeting with Russia, which was contemplated at one time, instead of going to Australia to face Argentina.

And the June 9th clash runs the risk of being further devalued if Argentina do not have a coach in place.

The Spanish press have speculated that Sevilla boss Jorge Sampaoli will be announced on May 22nd. But if the negotiations drag on and he is not free in time, then the farcical possibility exists of Argentina making the long journey with a caretaker coach. 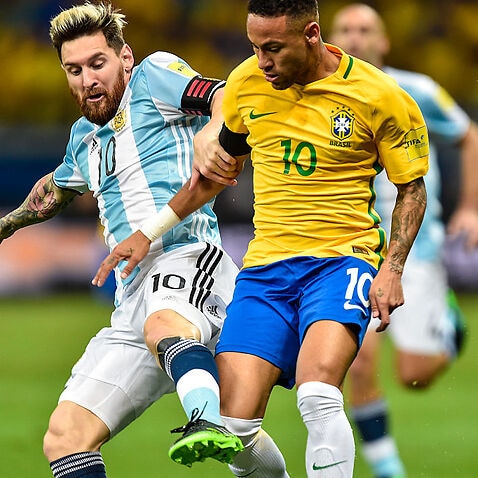 Everything you need to know about Brazil v Argentina tickets

But if the Brazil-Argentina clash might fall short of expectations, the flip side is that this makes the Australia-Brazil game more important.

Because it will be a test for Tite’s men – away from home against a different style of opposition who are preparing for a tournament – the Confederations Cup in Russia.

Tite would love to be taking part in the Confederations Cup, to prepare his team and get a flavour of conditions in the World Cup. In lieu of that however, he will be taking a few Russian lessons.

“I’m not going to be speaking the language,” he admits, “that is not my objective. But I want at least to be able to be polite, to say ‘good morning’ or ‘good evening’ and create a proximity with the people.”

But saying g’day is plainly not high on his list of priorities.