Out-of-favour Aziz Behich could be heading for a swift exit from Dutch champions PSV Eindhoven - the club he joined in August on a four-year deal.

The Socceroos defender’s agent, former Danish international Mikkel Beck, has revealed that only European rules limiting the number of clubs a player can represent in a single season scuppered a January move.

And the plan is now to “sit down and talk with the club” in the northern summer to in all likelihood expedite a switch elsewhere for Australia's first choice left-back.

The 28-year-old has made just four Eredivisie appearances - all off the bench - since signing from Turkish outfit Bursaspor - and two starts in the KNVB Cup.

That’s two appearances less than he’s made for his country in the same period.

“We’re not happy with the situation and there was interest in January, but it was not possible to move because of the rules,” declared Beck, who also represents Socceroos goalkeeper Mat Ryan.

“We are studying the situation now for the upcoming transfer markets and we will have to sit down with the club in the summer and try to find the best possible solution for all parties.

“Mark van Bommel (PSV coach) doesn’t think he’s the best one in his position at the club. That’s his choice and we respect it, but it’s not an easy situation.”

Beck, though, is surprised by Behich’s lack of game time with the league leaders, especially in the light of van Bommel’s “insistence” on bringing him to the Netherlands. 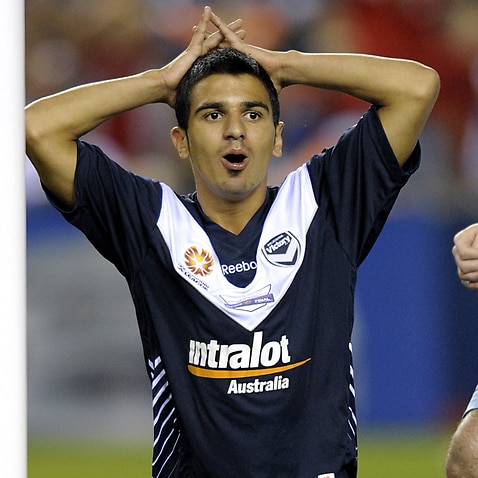 The starting spot has instead gone to 22-year-old Spaniard Angelino, signed from Manchester City in July.

Behich came onto van Bommel’s radar working alongside him at the 2018 FIFA World Cup in Russia, where the former Netherlands star was assistant to head coach Bert van Marwijk.

He subsequently brought both Behich and fellow Socceroos defender Trent Sainsbury to PSV when he landed the top job.

Sainsbury has met a similar fate - spending most of the season marooned on the bench with just three league appearances to his name.

“We had other options but in the end Aziz decided to go to PSV because first and foremost he wanted to play outside Turkey, but also he wanted to work with the coach that he knew.

“We anticipated he would be playing a lot and of course PSV were also in the Champions League, which would’ve been something new for Aziz.

“There were lots of big factors in signing for PSV ahead of a couple of other big clubs.

“He was really happy about the choice but of course had he known that van Bommel didn’t want to use him then we wouldn’t have signed for PSV.

“He wanted to play football not to sit on the bench.”

Whilst Beck is perturbed by a predicament which could ultimately affect Behich’s hold on a starting place under Graham Arnold with the Socceroos, he said the final decision on his future rests with PSV.

“We know there will be interest again in the summer from certain clubs,” he said.

“But let’s wait and see ... he is still under the contract and it’s still up to PSV what is going to happen.

“But I don’t think they will be against a good solution, so long as if it suits everybody.”

Beck said Behich had not allowed his predicament to erode his self belief, explaining: “Aziz is a very strong person and a very professional guy.

“He’s super good to work with and we have tried to change a difficult situation into something positive.”

Commenting on the possible impact lack of game time might have on Behich’s Socceroos spot, Beck said: “Of course the national team is always part of the thinking of any Australian player because because it’s the biggest honour to play for your country.

“I think Aziz is the number one at the moment. He had a very good Asian Cup as well and showed even if he’s not playing week-in week-out he can still be performing at the highest level for his national team.

“In the long run it’s not an ideal situation not to be playing each week.

“He needs to play and that’s why we need to sit down and find the solution.”