Holders Bayern Munich began their Champions League defence with a stylish 4-0 Group A victory over Atletico Madrid thanks to an eye-catching display from Kingsley Coman.

Coman scored the decisive goal when Bayern beat Paris Saint-Germain 1-0 to claim their sixth European crown in Lisbon in August.

The France winger was prominent for Bayern again on Wednesday with the opening goal and a fine assist for Leon Goretzka in the first half against a sluggish Atletico.

Corentin Tolisso added a third after the break with a long-range strike before Coman put the gloss on the result with a brilliant individual goal. 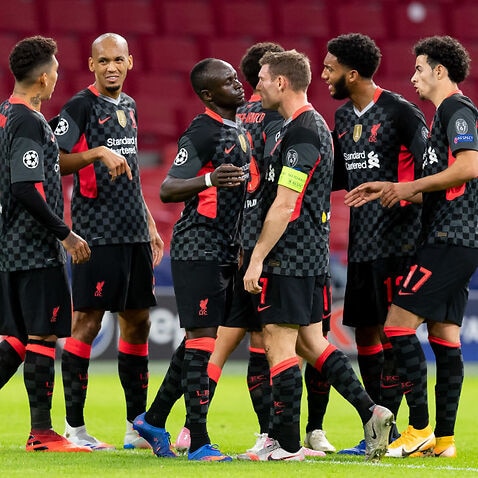 Bayern showed the swagger expected from the reigning champions and a spectacular volleyed effort from Robert Lewandowski, which flashed across goal, set the tone for Hasni Flick's side.

The Bundesliga outfit were rewarded for their first-half dominance with a goal that owed much to Joshua Kimmich's determination after he chased back and seized on a wayward Atleti clearance.

Kimmich curled a high cross to the back post that Coman controlled deftly with his left foot before calmly stroking the ball past goalkeeper Jan Oblak with his right.

Coman's fleet footedness helped increase the advantage shortly before the interval as he twisted and turned, then slid a low ball into the area, which Goretzka crisply arrowed into the corner of the net.

Atleti's best opportunity of the first half saw Yannick Carrasco cut the ball back for Luis Suarez, but the former Barcelona striker snatched at his shot and sent it wide. Joao Felix thought he had pulled a goal back for Atleti early in the second half, only for VAR to overrule it because Suarez had obscured Bayern goalkeeper Manuel Neuer's view from an offside position.

Tolisso extinguished any hope Diego Simeone had of his side salvaging something from the game when he struck a superb half-volley into the top corner, which left Oblak grasping at thin air.

Coman then capped a fine display with the standout moment of the game.

The France winger picked up the ball on the halfway line, bolted towards goal and danced his way past Atleti's tired defence in the penalty area before striking a low angled shot past Oblak.

What does it mean? Imperious Bayern look a good bet

This was the second time the teams have been drawn together in the group stage of a Champions League campaign, but the gulf in class between them was a chasm as Bayern inflicted Atleti's joint-worst defeat in the competition.

Simeone's teams are normally renowned for their ability to shut teams out but Bayern managed 16 shots – nine of which came from inside the penalty area – with 13 crosses to underline their attacking dominance.

Flick's side are favourites to retain their title and that tag looks more than justified on this evidence.

Coman provided the standout moment in Bayern's final victory over PSG and the impression he left on this game was that he is hungry for more.

The 24-year-old posed Bayern's greatest attacking threat as he created four chances with a passing accuracy of 87.5 per cent from the 24 passes he made. His ice-cool finishing was emphasised by his shot conversion ratio: two goals from two shots on target.

If Atletico were to take anything from this game they needed a big performance from Suarez but the experienced Uruguayan endured an off night.

Suarez - scorer of five goals in his last five Champions League starts before this game - managed just one shot and was caught offside when Felix found the net. He was wasteful in possession, with a passing accuracy of 65% from 20 passes, and failed to create a chance.

Bayern Munich have a home game against Eintracht Frankfurt in the Bundesliga this Saturday while Atletico will look to bounce back from this thrashing when they host Real Betis in LaLiga on the same day.