As members of one of the most advanced nations in the world, I am forever amused by the one thing German people won’t let go of: cash.

Credit cards have very limited traction in Germany. They never have and, due to Germans’ pathological fear of debt and capital speculation, perhaps never will. Yet the standard of living in Germany has never been higher.

The lesson? You don’t need to spend beyond your means to get ahead; just be smart about it. Same with football.

Follow the logic and you’ll see how Bayern Munich became champions of Europe for a sixth time today.

This story starts with the ending: Bayern’s starting XI in the UEFA Champions League final cost under 20 per cent of the A$1 billion Paris Saint-Germain spent on their starters.

Believe it or not, Bayern Munich have made a profit for 20 consecutive years. And they’ve done it whilst being majority fan-owned. Despite enjoying sustainable commercial support, they are not bailed out by an oligarch. There is no blank cheque.

In the decade between 2009 and 2019 – the decade in which spending spiralled out of control elsewhere – Bayern spent €727 million (A$1.2 billion) on players, putting them 17th on the list of the highest-spending clubs.

While Borussia Dortmund is held up as one of the greatest development clubs in world football, they are 18th on that list and spent almost as much as Bayern. So how did the Bavarians do it?

Some analysts will call it a “Moneyball” strategy, though I am not sure giant Bayern are comparable to the humble Oakland A’s. “Bayernball”? Close enough.

It is not based on sabermetrics as much as it based on taking advantage of how football has become seduced by irrational speculation and the forgotten art of identifying value in a market saturated with bloated money. 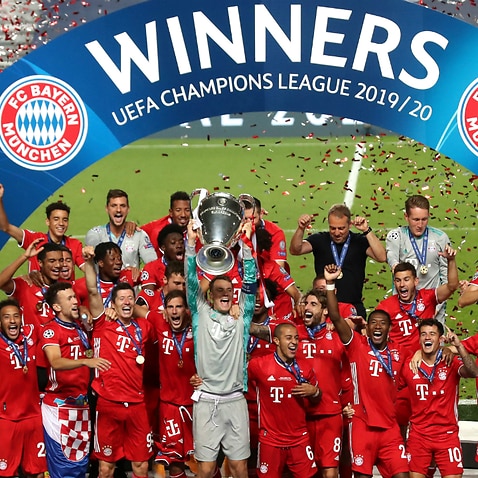 Bayern have largely built their squad using a combination of four methods:

3. Buying young up-and-coming players before their potential has been reached.

There is no better business than acquiring an asset for free and Bayern have done that with some seriously good players: Robert Lewandowksi, Leon Goretzka, Sebastian Rudy and Manuel Neuer’s heir apparent, Alexander Nübel.

All were signed well before their existing deals expired. It is now a well-worn negotiating strategy for agents in Germany to run down their players’ contracts: pay up, or we are talking to Bayern.

Where Bayern differ from the romance of little Oakland is that they’ve been able to leverage their “brand” to lure elite players. These are players who could walk into more lucrative deals elsewhere.

Equally smart was how Bayern used loan deals to acquire established, premium talent without the risk of acquiring a long-term liability.

Philippe Coutinho (Barcelona) and Ivan Perisic (Inter Milan) both fell out of favour at their parent clubs – as did James Rodriguez (Real Madrid) previously – despite being some of the most accomplished players in Europe.

Bayern gave them the opportunity to rekindle their confidence in a winning team. Short-term, it has bought them time to find long-term replacements for Franck Ribery and Arjen Robben. But getting young players with untapped upside has been the cornerstone of Bayern’s development.

The prices paid for Joshua Kimmich (€7 million), Alphonso Davies (€11.3 million) and Serge Gnabry (€8 million) are mind-boggling low – especially given they are now worth around €300 million combined.

There have been more expensive purchases but they’d still make handsome profits on the €45 million paid for Leroy Sané, the €35 million for Benjamin Pavard, the €20 million for Niklas Süle, the €25 million for Thiago Alcantara and the €28 million on Kingsley Coman (another signed on a two-year loan deal at first).

That’s the sweet spot of spending, where you can still cover the purchase price. Only too often the “big clubs” of Europe fall into the trap of buying at the peak and seeing those players depreciate rapidly.

Have there been misses? Sure. They broke their transfer record to bring in Lucas Hernandez for €80 million from Atlético Madrid last year.

Davies has him well covered at left-back, Alaba and Jerome Boateng in the centre. At least he's still only 24 years old, compared to Boateng's 31.

Corentin Tolisso cost half that amount but Bayern will recoup most of that this summer if he is sold, just as they managed to do with Renato Sanches (€30m).

Ultimately, you won’t find Bayern linked with a swoop for any of the sport’s most high-profile players. But with three Champions League victories this millennium – trailing only Barcelona and Real Madrid – and eight straight Bundesliga titles, why would they change now?

It does seem this humbler strategy has also helped build a team-first mentality in an era where brash individualism is compromising team harmony. Manager Hansi Flick has never looked like losing control of this dressing room.

To some, that might seem limiting in the never-ending thirst to become a global brand. Bayern don’t seem as glamourous as the Spanish giants, the free-spending English clubs or even their vanquished opponents in the final, Paris Saint-Germain.

But this is what they pride themselves on. They’re a traditional club, not a tax write-off or a political pawn, fuelled by an endless desire to dominate whilst doing it efficiently. Mia San Mia (“We are what we are”) is as much a strategy as a slogan.

That Bayern have become so dominant is greatly frustrating to many in Germany and a classic criticism of the Bundesliga from abroad.

Still, Bayern have climbed to the top using stealth, smarts and cunning, and in an era of football where money is oft-expected to solve everything, they’re proving the German approach to cash and credit has never worked better.