Real Madrid begun their first La Liga campaign under Julen Lopetegui with a 2-0 win over Getafe at the Santiago Bernabeu.

In the first league game since Cristiano Ronaldo's departure to Juventus, Gareth Bale seized his chance to impress, setting up Dani Carvajal for the opening goal before scoring the second himself after the break.

Lopetegui suffered a 4-2 defeat to rivals Atletico Madrid in the UEFA Super Cup in his first competitive game in charge, but a 10th league win in a row over Getafe looked likely once Carvajal broke the deadlock.

Gareth Bale has now scored in Real Madrid's opening game in each of the last four LaLiga seasons.

If he doesn't get the first... https://t.co/ujsIJ3HnJZ

Madrid, who started Keylor Navas over Thibaut Courtois in goal, were not quite firing on all cylinders but never looked likely to throw away a result given Getafe did not manage a shot until the 69th minute.

Bale, starting wide on the right, hit the bar with a diving header early on before Carvajal made it 1-0 20 minutes in, nodding the ball over David Soria after the keeper had punched Bale's cross half-clear.

Getafe handed them a second goal six minutes after the restart, when Bale's shot was parried into the net by Soria after Marco Asensio had stolen the ball from centre-back Djene Dakonam, giving Lopetegui a satisfactory start to life in the top flight.

What it means: Positive signs but plenty of work for Lopetegui

There was always going to be a period of adjustment for Madrid in the post-Zinedine Zidane era, and this victory inside a half-full Santiago Bernabeu underlined as much.

Madrid looked slick at times but Lopetegui's fluid system is not yet in full flow. The central midfielders seemed reluctant to move forward and support Karim Benzema and, with Bale and Asensio sticking to their wings, it left the striker very isolated against the Getafe back four at times.

That said, they restricted the visitors to almost no chances whatsoever and certainly deserved to take all three points. Lopetegui will be judged primarily on these early results, especially since Barcelona were allowed to build a lead in the title race from the very start of last season, so any victory will be considered a positive.

Pat on the back: Bale ready to pick up Ronaldo mantle

This season will be a pivotal one in Bale's Real Madrid career, as he finally no longer needs to play in the shadow of Ronaldo, and he has got off to an ideal start.

Soria did not cover himself in glory with the way he dealt with the Wales star's cross for Carvajal or his second-half finish, but a goal and an assist in the opening league match is not to be sniffed at.

Boot up the backside: Dismal outing for Dakonam

Dakonam was linked with a big-money move to Leicester City during the English transfer window, but Foxes fans will not be too disappointed to have missed out on the defender based on this performance.

The centre-back was booked in the first half for a poor challenge on Karim Benzema as the striker left him for dead with a stepover, and it was his dawdling at the back that allowed Asensio to set up Bale for the crucial second goal. 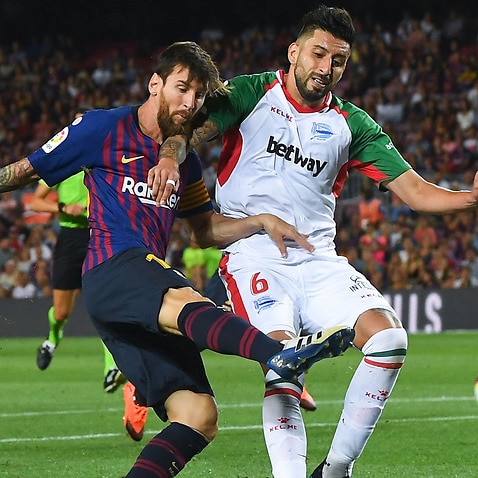