Under-pressure Markus Babbel could find himself out the door at Western Sydney Wanderers as soon as this weekend, if the struggling club fall to a fourth successive A-League defeat at Wellington Phoenix.

Patience with the German coach is near breaking point, amid speculation that concerned chairman Paul Lederer was poised to pull the trigger prior to Saturday’s 2-0 loss to Newcastle Jets.

Lederer’s finger remains poised as he seeks answers to an alarming form slump which has seen the Wanderers fall from ladder leaders after four rounds to fourth spot after seven - and winless since a fortuitous 1-0 derby victory over Sydney FC five weeks ago.

It’s understood Lederer gave Babbel a five-game ultimatum at the start of the campaign to convince him he was the right man to lead the club into a glowing new era at Bankwest Stadium. 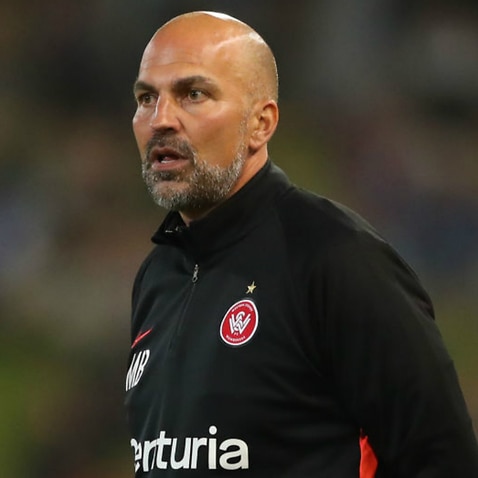 Babbel, 47, looked to have found a panacea as the Wanderers jumped out of the blocks early this season, but familiar frailties and inconsistency have resurfaced once more - in tandem with post-match temper tantrums - to further erode his position.

Stern criticism of his players, after the loss on the Hunter hasn’t endeared him to the squad, some of whom are already bamboozled by his methodology.

With Lederer having invested heavily in a new training complex and approving Babbel bringing in the likes of former Bundesliga players Pirmin Schwegler, Nicolai Muller and Alexander Meier, the chairman was anticipating instant dividends.

With so much invested, and so much on the line this season, Lederer isn’t willing to show too much more largesse.

Former Melbourne Victory coach Kevin Muscat - currently scouring the overseas markets for an opening - has been linked with the job should Babbel go.

However, it’s likely to club would once again opt for an overseas coach.