With Tomi Juric and Nathan Burns injured, once again the pressure is on Australia's all-time leading goalscorer, Tim Cahill to guide Australia on the road to Russia. 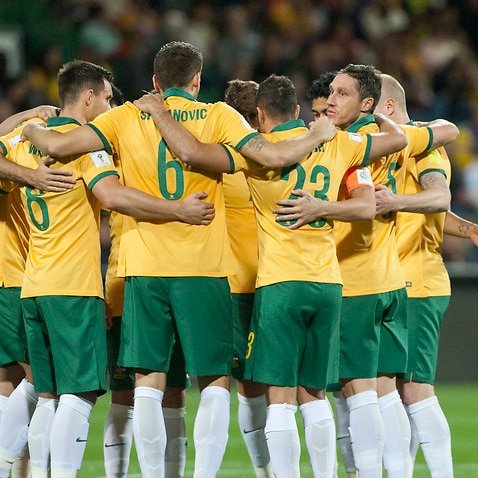 Watch the Socceroos' Road to Russia on SBS

Luckily for the Socceroos, he thrives under that pressure and the expectation it brings.

Australia bounced back against Kyrgyzstan last week, after a humbling 2-0 loss to Jordan on 9 October, but injuries to strikers Juric and Burns have left the Socceroos' striking stocks bare.

The reponsibility is, once again, on the shoulders of 35 year-old Cahill to ensure the green and gold qualify for a third consecutive FIFA World Cup.

A place at Russia is far from secure for the Socceroos, but a win tonight will keep them within striking distance of Group B leaders Jordan.

Sitting last in the group, Bangladesh will be hoping to give Italian coach Fabio Lopez his first win in charge, after slumping to 2-0 and 5-0 defeats in his first two matches.

There is no suggestion though that Bangladesh, on the evidence seen in Perth in the reverse fixture, will be of any danger to Socceroos - It's really Australia's game to lose.

However, the next few games will be a delicate juggling act for coach Ange Postecoglou, who needs to ensure results, obviously, while also providing much needed international experience to exciting young talent like Aaron Mooy.

The last time these two sides played, Australia cruised to a 5-0 win, with Melbourne City midfielder Mooy stealing the show with a stunning strike.

The 25 year-old has has revelled in Postecoglou's possession-based style of play, but still relatively green at international level.

And so the spotlight will be on Cahill.

His goal against Kyrgyzstan takes his tally to 42 goals in 87 games, well clear now of the 29 scored by Damian Mori, and the 28 by Archie Thompson.

He is in rare company, too, as one of the few players to have scored at three world cups.

Even so, he was often in the shadow of the likes of Harry Kewell and Mark Viduka. Guus Hiddink didn't even start him against Japan in 2006, when Cahill came off the bench to score his deadly double.

But now in the twighlight of his career at Chinese club Shanghai Shenhua, Cahill has outlasted them all and will be the main man for Australia as they look to establish themselves as World Cup regulars.