There is a hierarchy in world football that Australia aims to, and must overturn.

The players expect everyone to know who they play for, how much they cost, how many Instagram followers they have.

They expect two types of respect. Personal, and team. Australians have none of it.

Person to person, our culture is equality. Team to team, we don’t cower behind cautious tactics, but play with the bravery Australians are known for. The bravery our Diggers fought with, became famous for, and expect us to carry on in their name for their sacrifice. We don’t give respect in Australia, it must be earned. Person to person, and team to team.

Few aspiring nations can muster the courage to approach every team without trepidation, of any kind. Australia can. Because that is who we are.

That is our secret. We treat everyone equally, believe ourselves to be anyone’s equal and have neither an inferiority nor superiority complex. We simply believe all to be the same. Only in Australia does the PM cop the middle finger. And is expected to cop it. Because he or she is no better than anyone else. This is an important part of our national and sporting success.

We are never overawed because we see no difference between people. Neither do we revere those with financial success. More, or less money never made a person, we say. The man/woman on the street corner are down on their luck, not their inherent worth.

New arrivals love Australia because of how they are treated, not just its extraordinary beauty. They are instantly equal, no divisions by class or means. In our country, no one has a royal right. There is no Australian monarchy. It is what makes our national teams strong because there are no hierarchies, no prejudices, no enmities and no divisions. We are one. Matters not your place of birth nor the flag your parents fly.

We must prove ourselves against a major nation at every FIFA World Cup. It is a gift we eagerly embrace because it is a chance to show who we are. West Germany '74. Brazil '06. Germany '10. Spain '14. France '18. The list will go on. Each of our national teams represent us, our national character. We may lose, but we go for the win. We do not value reputations. We believe we can achieve greatness, because that is what we created out of a rock, in the middle of vast oceans, with the world’s oldest living culture.

In this context, our opponents aren’t supermen. They’re newcomers. We’ve been around for thousands of years. The wisdom and groundedness of our first peoples is part of who we are. We have a saying that someone has gotten ‘ahead of themselves’. We call it the ‘tall poppy syndrome’. It means that despite what they achieve, we expect everyone to remain the same and if they do otherwise, an Australian will remind them. It is a strength, let’s not lose it.

And let us consider, then, our opponents tall poppies. Needing to be brought back ‘down to earth’. Where Australians live.

We know how to work. Without hard work, putting in to get out, our nation could never have been forged from the harsh and unforgiving environment. And we understand instinctively that to survive, to prosper, we have to work together, to pool resources, to treat each other well and look after those we trust. For trust is everything to an Australian. This is why mateship is in our DNA. And teamwork.

In football, as in life, we only get out what we put in and few can work like an Australian team.

France in 2018 is simply another step on the journey to achieving something great. And Denmark, and Peru. A chance to test where we are, what we need to improve, how we need to approach these games to one day be the best. Our World Cup journey is a process, not a match. The immediate goal a quarter-final. The end goal to place the Australian flag on top of world sport. 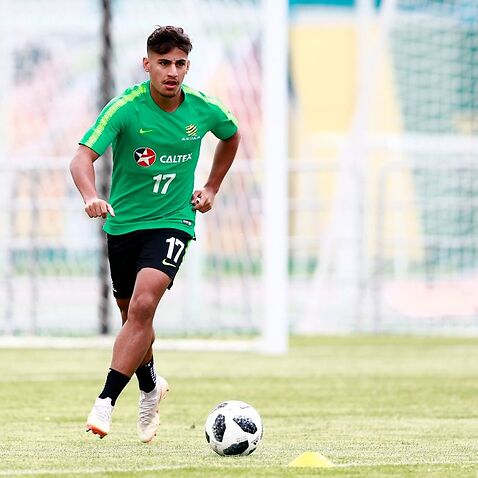