The 17-year-old has been touted as a star of Sydney's academy where he has been for the past five years.

The A-League club says it will receive a transfer fee from Brighton, and his junior clubs will also receive some training compensation payments.

Peupion played in all four of Australia's matches at the 2019 FIFA U-17 World Cup and was later invited to trail at the Premier League side.

"I'm very excited, it's a dream move for me but I am going to miss Sydney FC a lot and I have fond memories.

The central midfielder told The World Game in April that a meeting with Socceroos midfielder Aaron Mooy helped seal the deal. 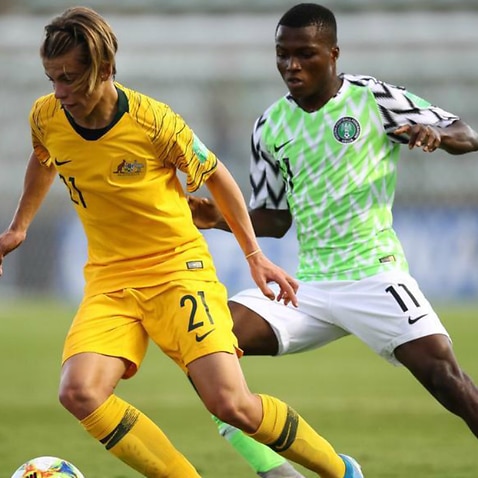 “He’s always been a player I’ve looked up to and admired, so when he came up and said hello and had a bit of chat it was quite special,” said Peupion.

“We share the same agent (the Stellar Group who also represent Gareth Bale) and Aaron was told there was an Aussie boy coming town, and he took me under his wing a little bit.

“I also got to meet (Socceroos and Seagulls keeper) Mat Ryan a couple of times, and those boys were really good to me.”

“Sydney FC have been really good to me but now is the right time to take the next career step,”

Peupion will initially link with Brighton’s U-18 academy team, but he’s already trained with the U-23s and didn’t feel out of place.

“The facilities there are incredible and I just think it’s a good fit. I loved the place the minute I got there.

“I’m just going work as hard as I can to get to the next level.”

"Cam is an example to all young players as he has worked very hard to realise his full potential," Cross said.

"In the early years with Sydney FC he may not have appeared to be an outstanding player, but I always knew what he was capable of becoming."

Peupion has already started training with Brighton's under-23 side.