Greece-based striker Apostolos Giannou is on the brink of joining the Australian influx to the Chinese Super League by inking a deal before Friday’s transfer window closes. Giannou, who holds duel Australian and Greece citizenship, has netted 13 goals in 21 games in the Greek Super League for sixth-placed Asteras Tripolis - second only to Olympiacos's Konstantinos Fortounis with 15.

The Melbourne-raised hitman is contracted with Asteras until mid-2018 - but it’s understood that a substantial transfer fee has been agreed with an unnamed Chinese side.

If the deal moves forward he will join the likes of fellow Australians Matthew Spiranovic, Ryan McGowan, Trent Sainsbury, James Troisi and Michael Thwaite in China, with Socceroos’ star Tim Cahill also primed to remain in China after his abrupt departure from Shanghai Shenhua. Moving to China was the right choice for Spiranovic

Last month Giannou spoke of his willingness to test himself in another league after nine years in the land of his birth.

“I am at a good club and I’m enjoying my football, which is the main thing, but if something interesting came along then of course I’d think about it,” the 26 year-old said.

Chinese clubs traditionally target Australian defenders as their allotted Asian player, with the really serious money lavished of late on strikers such as Ezequiel Lavezzi, the Argentine ace who has signed for Hebei Fortune for a reported $800,000 a week. 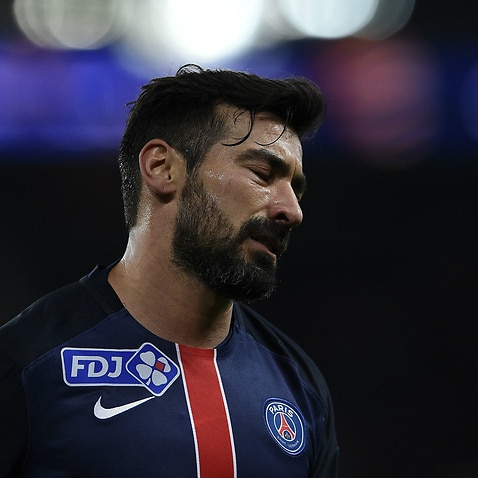 Colombian Jackson Martinez (Atletico Madrid to Guangzhou Evergrande for $60 million), Chelsea’s Champions League-winning midfielder Ramires (to Jiangsu Suning for $42 million) and Brazilian Alex Teixeira (from Shakhtar Donetsk to Jiangsu $77 million) are the other headline moves of this transfer window.

While former Australian youth international Giannou’s looming move won't be anything of that magnitude, he will find himself mixing it in a competition suddenly awash with some of the world’s top talent.

He could also find himself in Australia in June, where it’s possible he could line up for Greece against his adopted country in his home city of Melbourne for a likely friendly against Australia on 7 June at Etihad Stadium.

That match is the second installment of a double header, with the opening joust between Australia and the 2004 European champions tentatively scheduled for ANZ Stadium three days earlier.

Though he switched allegiances to Greece and has one cap for their senior national team, the striker who once played under the tutelage of Ange Postecoglou for Australia’s Under-17s, could conceivably become a Socceroo with doubts remaining over whether the Greek authorities processed to the necessary paperwork to ratify his change of status.

Greece failed to qualify for Euro 2016 in France and are expected to bring a near full-strength squad to Australia. Over 95,000 fans packed the MCG for the last meeting between the two countries in 2006, a farewell clash before Australia left for the 2006 FIFA World Cup.