Arsenal's Australian import Mat Ryan says that the Gunners haven't given up on their hopes of qualifying for the Champions League this season.

Despite suffering back-to-back Premier League defeats last week against Wolves and then Aston Villa in the space of five days, Ryan, who made an impressive debut in the latter match, offered a positive message.

"There is still a lot of the season left and hopefully we can finish it off strongly and get up and around the European places and qualify for the Champions League," Ryan told the Evening Standard newspaper.

It will be a tall order with Arsenal currently lying in 10th place, 10 points adrift of the top four but there are 15 matches left in this most topsy-turvy of seasons. 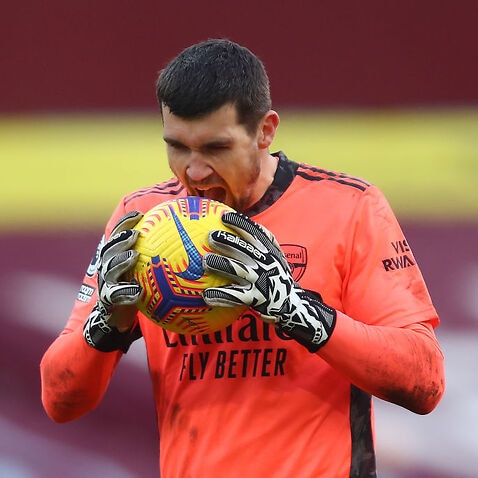 Exactly how much of that campaign Ryan will take part in remains a mystery as he's set to give the gloves back to the returning first-choice Bernd Leno for Sunday's Premier League match against Leeds.

"Coming here, being honest, I probably didn't think I was going to get a Premier League game, so one's a bonus.

"I was happy to put in, I think, on the initial perception of it, a good performance."

Indeed, despite the 1-0 defeat by Villa in which he was beaten only by a deflected shot in the opening two minutes, the Australian demonstrated his value with a performance that featured seven saves and earned praise from his manager Mikel Arteta.

When he'll back between the sticks, he can't be sure but Ryan is determined to enjoy every moment.

"Whatever life and football throws at you, you've got to keep rolling up your sleeves and getting on with it and not giving in to it," he said, reflecting on how he overcame a hip injury to play in Saturday's match.