The one-time Perth Glory and Joeys coach is a household name in football-crazy Malaysia, from his exploits as a player in the Super League at Selangor, Johor and Sarawak - and now off the field at a club who have won six successive domestic titles, and defeated Adam Taggart’s Suwon Bluewings in the AFC Champions League group stage before the competition went into coronavirus lockdown.

The former Olyroos assistant, 51, has been a part of Johor’s last four title campaigns, a key cog of a technical team awash with Spanish and Argentinian coaching talent, backed by corporate giants across the region and playing to sellout crowds out of its newly-christened $220 million high-tech stadium.

The mastermind behind the Johor jigsaw - which boasts on-field talent like Brazilian stars Diogo and his ex-Lazio teammate Mauricio - is the “visionary” polo-playing, young sultan Tunku Mahkota Johor Ismail, the 35-year-old crown prince of the booming southern Malaysian state and first in line to the throne. 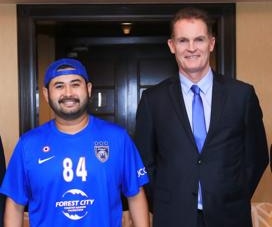 Edwards hobnobs with visiting football dignitaries like Cristiano Ronaldo, David Beckham and Luis Figo and has been instrumental in driving a youth program which has helped nurture a new wave of young domestic talent.

It’s an infrastructure A-League clubs can only dream of.

“TMJ (as the crown prince is known) basically started up the club (in its current incarnation) in 2013, and he’s been a visionary who has shaped our success with his energy, philosophy and love for the game,” Edwards said.

“He actually went to school in Perth.

“We’ve got world class facilities here... we started with just one team and one change room and now have a stadium that is the envy of the region, state-of-the-art training facilities, a sports science hub and a live-in academy set up.

“The club is already the biggest in south-east Asia but the plan is to become one of the top clubs throughout Asia, although we’ve still got a long way to go to achieve that.

“TMJ wanted to first dominate Asian football, put the best infrastructure in place and then make inroads in the ACL, which no other team in Malaysia has done before.

“We had a partnership with Valencia - which is where our academy coaches come from - and they liked it here so much they decided to stay.”

The MSL is in shutdown until at least mid-April, in unison with most of the rest of the football world, giving time for Edwards to reflect.

“This is the most progressive club in south-east Asia,” he said. “We’re also showing we can mix it with the big boys across the whole of Asia.

“We’ve got 30 foreign staff, down from the manager (Figueroa) and sporting director Martin Prest (Argentina) to the fitness and physio staff (Spain).

“My role is to oversee the academy, first team and JVT 11... it started from scratch and we’ve seen so much progress.

“Working with people of such calibre is challenging and rewarding. TMJ is a big fan of Spanish, Argentinian and Brazilian football. And he’s a stickler for every little detail.

“He has unbelievable contacts around the world like David Beckham and (super agent) Jorge Mendez, who are often here along with the likes of Ryan Giggs and Luis Figo.

“We’ve really got the best of everything here. On the field we’re a blend of locals and foreigners and our scouting network for home produced players is also extensive.

“It’s a pretty young squad but the foreigners are key too - players like Diogo and Mauricio and Gonzalo Cabrera and Leandro Velazquez (both Argentinia).