Lionel Messi played down Argentina's chances at the FIFA World Cup, though the hat-trick hero insisted the South American giants are a great team.

Runners-up at the 2014 World Cup, Argentina stepped up their preparations for next month's Russia showpiece with a routine 4-0 victory over Caribbean minnows Haiti in Buenos Aires on Wednesday (AEST).

Messi was the hero at La Bombonera – the Argentina captain and Barcelona superstar scoring three goals and assisting Sergio Aguero in the international friendly.

Argentina will face Israel on June 9 before going head-to-head with Iceland, Croatia and Nigeria in Group D at the World Cup, where reigning champions Germany, Brazil, France and Spain are among the favourites.

And Messi said Argentina are not among the candidates to lift the trophy as Jorge Sampaoli's men seek to win their third World Cup and first since 1986. 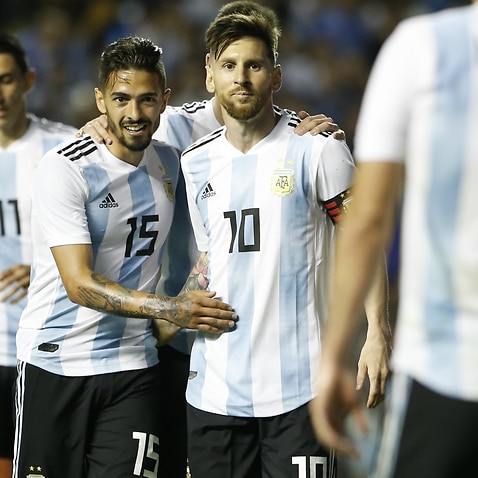 "I am very grateful to all the people, we always feel the affection of all, not like other times that we received insults," said Messi, who took his international tally to 64 goals.

"We all go to Russia for the same reason, the World Cup is the dream of us, of the country. We are not candidates but we are very good, training and improving day by day.

"We have good players and we are getting stronger to fight as an equal with anyone."

The five-time Ballon d'Or winner added: "In a World Cup, logic is almost never given. We have to aim to win the first game, which is the most important because it will give us peace of mind.

"Let no one have doubts that we are going to try everything, as people always ask us.

"We are going with a great squad that is becoming strong at the team and individual level. We are facing a beautiful possibility and we are looking for that."