Pep Guardiola will once again face accusations of "overthinking" the big occasion after a selection gamble backfired against Chelsea.

Rumours that Pep Guardiola had gone and done a thing were whipping around Estadio do Dragao's press box long before the news was confirmed an hour and 15 minutes ahead of kick-off.

He had indeed done a thing.

In 59 of City's 60 matches in all competitions this season, at least one of Rodri or Fernandinho had started in holding midfield. It seems unlikely that a 3-0 Champions League group-stage win over Olympiacos was the tactical template for Sunday morning's insipid 1-0 final defeat against Chelsea.

But there it was in black and white. City's top scorer Ilkay Gundogan would start at the base of the midfield, with a slew of attacking talent to do his bidding further up the field. It was a bold strategy but one that robbed the Premier League champions of their rhythm and did nothing to dissuade the threat coming the other way.

PEP 💬 I did the best in the selection. Against Lyon like it was against PSG, Dortmund, I tried the selection the best to win the game. The players know it, I think Gundogan played good, we were exceptional. pic.twitter.com/j5IgcsAtfv

Of course, Guardiola has previous in this regard in the decade since he last lifted the big trophy with Barcelona in 2011. Most recently, he deployed a disjointed 3-5-2 to be dumped out by Lyon in last season's quarter-final, although this probably had as much in common with the cavalier approach that saw Real Madrid dismantle his Bayern Munich side at the Allianz Arena back in 2014.

There was none of the control he craves, the control that lay at the root of City's magnificent revival from 12 points out of their first eight games to lift a third English title in four seasons. Their best chances in the first half came from an Ederson punt downfield and Kyle Walker running terrifyingly fast from right-back. Playmaker Bernardo Silva was the most notable performer in a talent-stacked City midfield for a succession of slide tackles.

What was more, this felt like the season when Guardiola had normalised his cerebral approach. City won the title without a conventional striker for the bulk of the season as false nines become the undisputed truth, he switched between a back three and a back four in-game during the side's most purple patch as Joao Cancelo – now off form and more understandably benched – roved.

In tough knockout encounters with Borussia Dortmund and Paris Saint-Germain he didn't blink and prevailed. It was the season where the concept of Guardiola "overthink" died until it was resurrected in Porto. 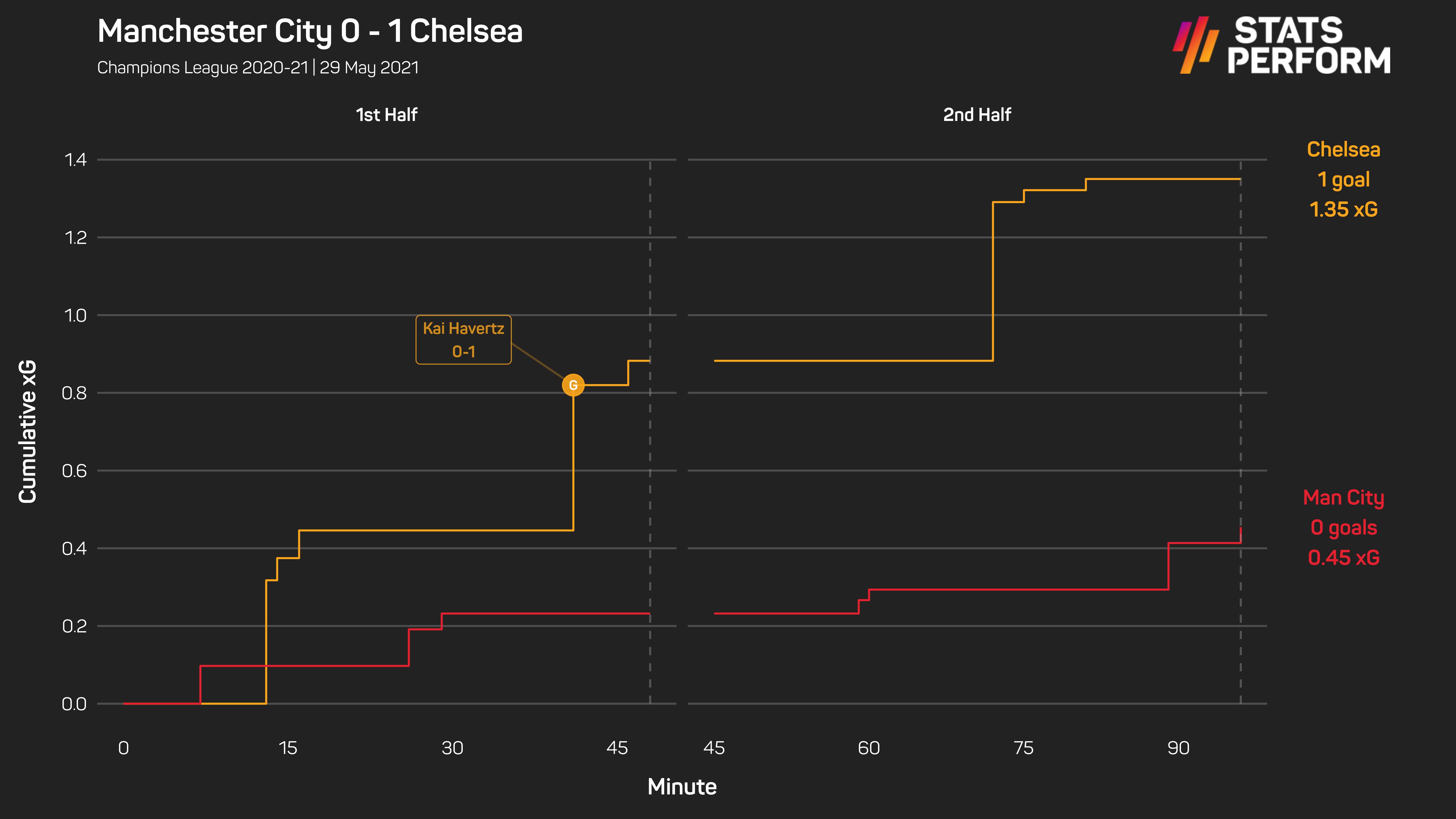 For all that Guardiola said City's two defeats to Chelsea recently, in the FA Cup semi-final and the Premier League with heavily rotated line-ups, counted for "zero" they were evidence of the problems Thomas Tuchel's rigorously well-drilled 3-4-2-1 could cause.

Additionally, Guardiola's respect for Tuchel is very well documented and that high esteem meant he was perhaps loathe to give his opponent something predictable.

Hard as it was to discern the plan as the men in sky blue engaged in chaos0ball, it was maybe designed to suffocate Chelsea's back three and Jorginho and N'Golo Kante – again, naturally, imperious on the grandest stage – and not let Tuchel's team out.

But City's disorganisation allowed Chelsea to make merry in the Fernandinho-Rodri shaped hole behind the forwards, exploiting it plenty of times before Mason Mount's delicious throughball allowed Kai Havertz to round Ederson for the decisive goal.

Fernandinho's introduction for Silva in the 64th minute meant the plan had failed. Even with Kevin De Bruyne off injured, it prompted City's most convincing spell of the match – admittedly a painfully low bar – and that should gnaw at Guardiola.

Sergio Aguero came on for Raheem Sterling, whose run of one club goal since February rarely threatened to improve, but one last act of injury-time heroism was beyond City's all-time top scorer, for whom the tears flowed after the final whistle.

Having declared himself "the happiest man in the world" on the eve of the match, Guardiola has ended a season that threatened to be remembered as his masterpiece on a note of bitter disappointment, his 10-year wait for a third European title going on and complicit in his own misery.