Newcastle Jets coach Carl Robinson believes Robbie Fowler's exit from Brisbane Roar is another indicator the A-League is in a reset mode.

The Roar confirmed on Monday that they had parted ways with the Liverpool legend less than a season into his tenure.

Fowler's departure means when the league resumes on July 16 after a COVID-19 hiatus, four clubs will be taking to the field under interim coaching staff.

Melbourne Victory are yet to find a long-term replacement for Marco Kurz after sacking the German in January.

It's a similar situation at Western Sydney Wanderers with Jean-Paul de Marigny still in a temporary role following Markus Babbel's departure while Adelaide and Dutchman Gertjan Verbeek parted ways during the shutdown.

Robinson, himself only hired by the Jets in February, said the situation was a sign of the changing times within the competition.

"The A-League is at a certain stage in their progression, obviously now with the Fox deal as well, maybe it's a reset stage which is very important," he said. 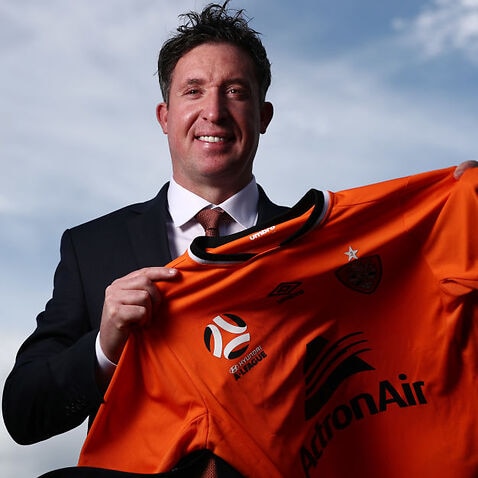 Fowler’s time at Brisbane feels incomplete for both

"The fantastic news of the Women's World Cup coming over will bring renewed interest which is very important, but it's a number of factors that obviously they need to get in order which I think they will do over a period of time."

A former Premier League footballer, Robinson says he was surprised by Fowler's exit but also knows it's part and parcel of being a professional coach.

The Roar have stated they will appoint an Australian to the role, a stance which Robinson says makes sense so long as the club finds the best candidate for the position.

"There's this party line of you need to hire local coaches and I read it and I smile and you know what I say with that is, I was a foreign coach in America and then suddenly because I spent six-seven years there I was an American coach even though I'm from Wales," he said.

"If there's a same level talent of coach in Australia as there is in Wales, hire the Australian local coach without a doubt ... but you can learn off foreign coaches as well as Australian coaches."