The news that Leo Messi has decided to leave Barcelona – or at least that he intends to leave – was as surprising it was predictable.

In one sense, how could he go? After all that he and that club have been through, it seemed unimaginable.

On the other, after all that has happened in the past few years, how could he stay? Relationships: they’re always complicated.

This one went on too long. It could have been a marriage for life but Messi has the right to point to FC Barcelona and utter those dreaded words: “You’ve changed”.

He’d be right. The fragmented Barcelona of 2020 feels but a shadow of 2010’s majesty. It is heartbreaking, but it’s over.

A clean, swift break is the best course of action. Both need to start anew and both will be better for it.

The favourites for his signature are Manchester City, if you believe the early press.

It does make sense: the most financially powerful club in the world’s biggest league, managed by Pep Guardiola, Messi’s favourite manager.

Further, Txiki Begiristain is the director of football, another close ally from their time at Barcelona. And Ferran Soriano – who is close to Messi’s family – is City’s chief executive. Messi has told Barcelona he wants to leave, crisis at the Camp Nou

But does Messi need City? And does City need Messi? He would lift them back into favouritism for the Premier League title but it would be a gruelling few years, wrestling for supremacy with Liverpool and fearing a resurgence from any of Manchester United, Arsenal, Chelsea or Tottenham.

Honestly, does Messi really want more grind? Does Guardiola really need the bile of the English press – not to mention the English fans – in case Messi isn’t scoring every week?

The underlying cesspool of negativity is a sizable risk. It was the grind at Barca that wiped the smile off his face many years ago.

Messi doesn’t love the rough and tumble of drama; he craves consistency, stability and being appreciated.

City might be stable but English football is a dragons’ den.

Before anyone talks about the need to “prove himself” in the Premier League, check yourself.

His record against English teams in the UEFA Champions League is incredible, scoring 26 times in 32 games, averaging a goal-per-game (or better) against Arsenal, Chelsea, Manchester United and Manchester City. Insane.

He’s still too good to take a major step down, ruling out the MLS, China and the Middle East for now. With 31 goals in 44 games last season, including 25 in 33 La Liga games, he’s arguably the world’s best player. 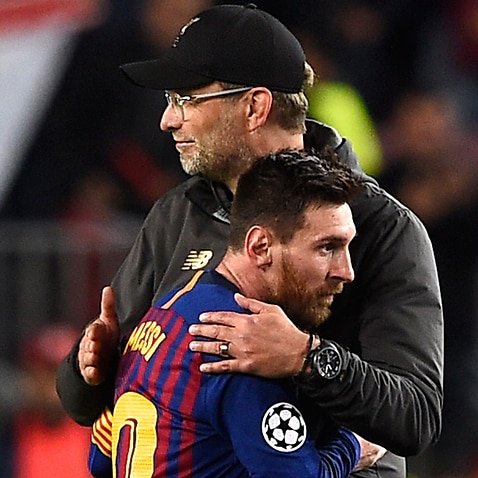 Is he at his peak? No. In the previous three years, he scored 107 goals in 104 league La Liga games. It does feel he’s 10-15 per cent off that level. Still, that’s perhaps the highest level any footballer has ever reached.

And therein lies a hint as to what might tilt Messi’s next move.

He’ll still want to be the star, still score the goals and still feel good about being part of an all-conquering team. He needs to go to a team that understands he is 33, not 23.

To keep the magic alive, he needs some protecting. He needs to save his energy for bursts, not pressing and defending.

At Manchester City, he can’t be afforded that luxury – not if they’re going to close the gap on Liverpool. In any event, City tend to look for long-term options when spending big.

There's only club who ticks all his boxes right now. That’s Paris Saint-Germain.

Clearly, they have the money. They have the backing of Qatar, who are hosting the 2022 FIFA World Cup and would dearly love to promote Messi’s international swansong there.

And their project in the City of Light is very nearly complete. With Messi, PSG instantly become the world’s most glamourous club, and with a front three of Messi, Neymar and Kylian Mbappe – MNM will replace MSN as the acronym for attacking royalty. Paris will laud Messi as one of their own; a kind of artistic genius they can appreciate. He’ll be greeted as a hero across France, just as Cristiano Ronaldo is in Italy.

And just as Ronaldo seems to have added beautiful years to his career by going to Serie A, Messi can add his own golden days by playing in Ligue 1.

PSG can nurture him through the domestic season and prime him for the Champions League, which he would dearly love to win again.

Messi will make it clear to any future employers that he is desperate to win either the 2021 Copa America or the 2022 World Cup, his final chances of international glory. The Qatari connection means this goal will be wholly supported by the club.

But above all, playing in Paris will be fun. He loves playing alongside Neymar and he gets to formally hand the baton of greatness to Mbappe.

His great ally in the Argentinian dressing room, Angel Di Maria, will be feeding him endless chances.

There’s enough of a challenge to keep him interested whilst acknowledging the fact that he’s no longer superhuman.

Ultimately, it’s not that big a change. Barcelona is close to the French border. He can duck home after away days in the south; friends can drive to watch him.

A third of the PSG dressing room is Spanish-speaking. His life wouldn’t be turned upside down. These things never get talked about but they do matter.

It will take some getting used to; seeing Messi in different colours. But it seems inevitable now.

One only hopes he chooses a destination that makes him happy – if only so he can bring the rest of us more joy.