In a cool, spacious house in the Sydney suburb of Concord, Trixie Tagg slides out one of four scrapbooks she has arranged on her kitchen table.

Tagg is looking for a particular photograph – one of her favourites from her playing days.

She pauses at an article featuring a picture of her and her local club team-mates from the 1970s. They’d been asked to pose in their football uniforms while brushing their hair and putting on make-up. She sighs, gives me a look, and flips on.

A few pages later, she finds it.

“Ah!” she says, her thin finger landing on the black and white image. “Here it is.”

It’s a remarkable football photo; the kind they put in museums. It’s an action shot with the ball – just struck and mid-flight – destined for the back of the net.

Tagg is there in her white headband and bright Australian uniform, her body re-balancing itself after shooting. The opposition goalkeeper watches over her shoulder, her face contorted in shock, as the white smear of the ball passes her by. You can almost hear the metal of the front post ping as it ricochets into the corner pocket. 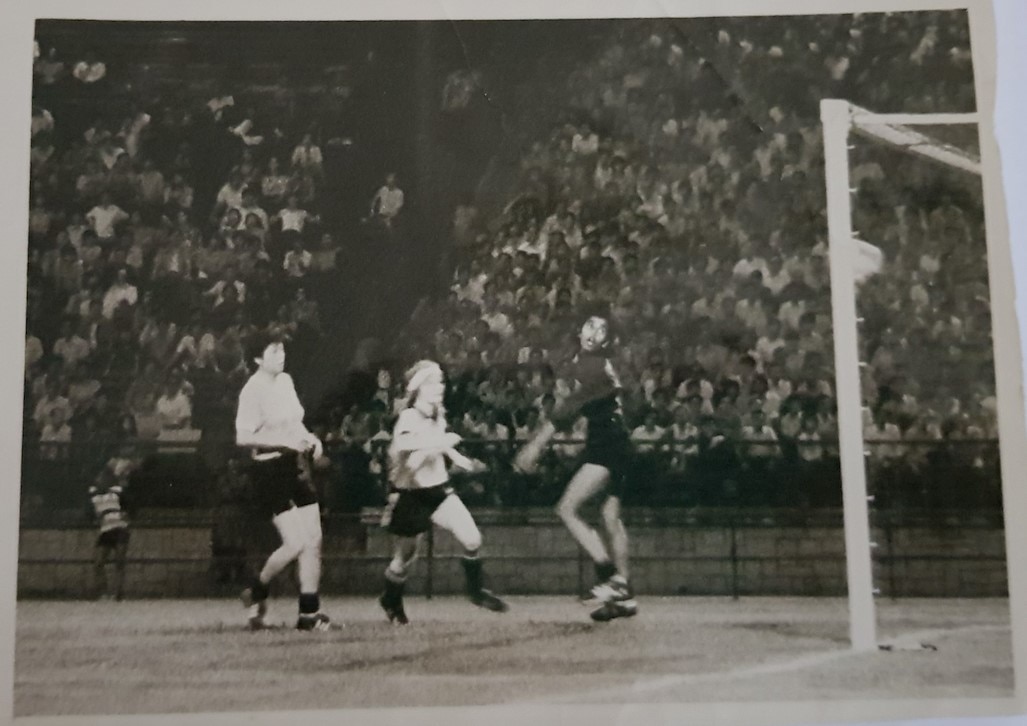 Behind them, thousands of spectators have filled the stadium’s main grandstand. A sea of transfixed faces in short-sleeve shirts takes up almost the entire background of the photo, stretching up and out of frame. There’s not a single empty seat.

Tagg smiles to herself. “That’s the goal I remember scoring in Hong Kong,” she says. “She crossed the ball from the left-wing – outside the penalty area – and I hit it on the half-volley. The ball soared and it beat the keeper. The stadium just erupted. I couldn’t believe it. That’s my favourite goal that I remember, of all the games I played.”

You wouldn’t know it without reading the caption lightly pencilled into the back of the photo, but this moment is one of the most important in the history of Australian women’s football. It shows Tagg, now in her seventies, leading the line of the first Australian representative side to play in an Asian competition: the AFC Women’s Championship.

“I’ll never forget that tournament,” Tagg says. “We did create a little bit of history. “It was the first big international tournament. It’s only the last couple of years that I realise and recognise the need to tell our history. It’s like a little building block of a bigger story, so that when people look up, ‘when did Australian women’s soccer start?’, it’d be nice to see the original team there.”

Despite its historic importance, you won’t find this team in official histories of the Matildas. That’s because the players who made up the “Australia XI” side who toured Hong Kong in 1975 were sourced almost entirely from one club – St. George Budapest in Sydney – and not through a competitive selection process.

Further, the Hong Kong team had been sanctioned by the Australian Soccer Federation who were, at that point, the only Australian governing body recognised internationally. However, the ASF had very little to do with women’s football in the past; instead, it was the independent Australian Women’s Soccer Association that was responsible for state and national Championships in previous years.

Representative teams line up for the Opening Ceremony of the first Women’s Asian Championship.
supplied

The 1975 side was therefore not truly representative of the nation, nor of the organisation that had been responsible for the women’s game up to that point. None the less, the team – and the tournament they participated in – remains an important chapter in the history of Australian women’s football.

“There was no official Australian women’s soccer team at the time, [so] we were allowed to compete as an Australian XI and wear official green and gold uniforms,” recalls Pat O’Connor, whose husband Joe coached the side alongside Jim Selby, the first official Matildas coach in 1979.

“Two players from Ingleburn Women’s Soccer Club came with us. It was a great opportunity to test our skills against full international teams from New Zealand, Thailand, Malaysia, Hong Kong and Singapore. When we arrived to play our first match, there were armed soldiers holding back a huge crowd as we got off the bus. We had never before played in front of so many people.

“We were treated like superstars and it was quite daunting for Joe and I to sit at the main table and dine with army generals and top Asian representatives.”

The tournament took place in late August in Hong Kong: mid-summer and torrential rain. O’Connor claims the honour of scoring Australia’s first goal in an Asian competition as the side lost 3-2 to Thailand in front of over 4,000 fans.

Australia would go on to win 3-0 against Singapore – with Tagg and O’Connor getting on the scoresheet alongside a 14-year-old Julie Dolan – before losing the semi-final to New Zealand 3-2. They then defeated Malaysia 5-0 in the third-place play-off to take the bronze medal, while New Zealand defeated Thailand 3-1 to win gold. Both games attracted over 10,000 spectators.

Sue Larsen was 17 at the time. “What do I remember?” she tells me in an email. “Really bad gastro and three days in bed; the heat and the rain; the amazing views from our hotel window; the shopping; being asked to autograph t-shirts and caps; the competition being so hard.

“The team from Thailand had been in an army camp training for months. The New Zealand team were all built like giants and had been together for a few months, and us as basically a club team – to come third overall was a huge achievement. It’s something that I am proud of and unless dementia sets in, something I will always remember and cherish.”

After the tournament, five Australians were chosen in the “Asian All-Stars” team including Tagg, O’Connor, Dolan, Connie Selby and Cristel Abenthum.

30 years before Australia would move from the Oceania Football Confederation to the Asian Football Confederation, a women’s representative team would open Australia’s door to the region. The 1975 tournament was the first of its kind, laying the groundwork for what would become the most prestigious football tournament in Asia, and a pathway to qualification for the Olympic Games and World Cups. The jersey worn by the Australian representative team in Hong Kong, accompanied by a pennant and match program.
supplied

While some of its players aren’t formally recognised as Matildas, many of them would go on to contribute to Australian football in other ways – including Tagg, who would become the first-ever female coach of the Matildas in 1981.

“I can’t recall anybody coming up to us [afterwards] and saying, ‘wow.’ There was no news coverage; it was different in those days. The only news coverage was what Beth Heydon telephoned to a newspaper to give them the scores here.

“We know we represented Australia with pride; we played our guts out every minute of every game. We didn’t give up if we were down in the score. We played some good soccer; you could hear it by the way the crowd acknowledged. A lot of men but also women.

“The whole atmosphere; to walk out in the stadium and see so many people interested in our passion, interested in watching girls play soccer… I’ll never forget it.”