Feyenoord fans showed up in large numbers to celebrate their first Eredivisie title of the 21st century at the Coolsingel.

An estimated 150,000 fans flooded the Coolsingel in Rotterdam on Monday to celebrate Feyenoord's first Eredivisie title since 1999. 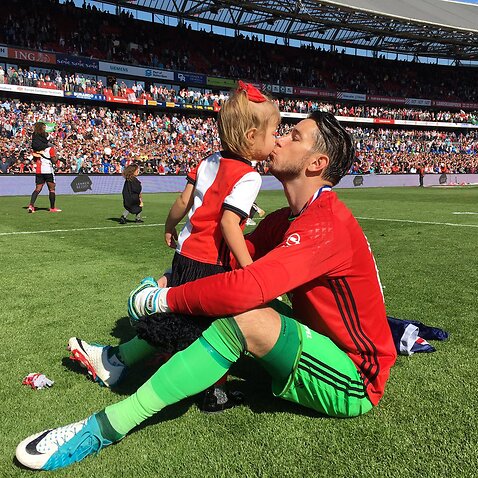 Giovanni van Bronckhorst's men beat Heracles 3-1 at De Kuip on Sunday to round off a season in which they topped the table right from matchday one.

The Feyenoord squad and staff presented the Eredivisie trophy to their hordes of fans from the balcony of Rotterdam's city hall at noon - with local police having advised fans not already in attendance not to come to the celebrations due to the large number of people.

Captain Dirk Kuyt and Van Bronckhorst were first to appear on the balcony - much to the delight of the Feyenoord faithful - before the remainder of the squad followed suit.

"We have had to wait 18 years on this title," Kuyt shouted into the microphone.

"You, the fans, never gave up and always continued to support the club.

"The moment has finally come now, we are Eredivisie champions!"

Local artist Lee Towers then started "You'll never walk alone" together with Kuyt and Van Bronckhorst before the fans joined in on what was a memorable day for many.

"We do not really realise what we have achieved yet," Van Bronckhorst commented.

"It is simply fantastic what we are going through here.

"I think we have had a great season."